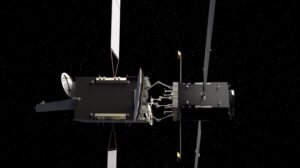 The startup, named Kurs Orbital, was co-founded by the former head of Ukraine’s space agency Volodymyr Usov. The company plans to launch a demonstration vehicle in 2023, Usov told SpaceNews.

Investments are pouring into launch vehicles and satellites, and servicing could be the next segment of the industry to gain traction, he said.

The market research firm NSR projects in-orbit servicing will be a $3 billion business over the next decade. Services that companies are expected to offer include orbit relocation, de-orbiting, refueling, components replacement and repair.

After leaving Ukraine’s space agency following a shakeup last year, Usov and a small group of entrepreneurs decided to start a satellite servicing company after securing rights to the Kurs rendezvous system. The Soviets developed the technology in the 1980s to dock with the Mir space station and later upgraded it for the Soyuz spacecraft to dock with the International Space Station.

Usov said Kurs Orbital has the rights to the original Kurs rendezvous system but is developing a new rendezvous acquisition module that uses machine vision, radar and robotics which “enables fully automatic docking even with uncooperative objects,” he said.

Not having to spend years and billions of dollars developing a new docking system is a huge advantage, Usov said.

Kurs Orbital plans to focus on servicing commercial geostationary satellites, a sector where Northrop Grumman’s Mission Extension Vehicle already is capturing market share following a successful space docking with an Intelsat satellite. Another mission launched in August to service a second Intelsat spacecraft but the MEV has not yet docked with the satellite.

Usov’s company will be several years behind Northrop Grumman and emerging player Astroscale, which last year acquired the intellectual property of Effective Space Solutions, an Israeli satellite life-extension and servicing company that will focus on the GEO market.

Kurs Orbital so far has raised $6.5 million to start the demonstration vehicle that will rendezvous with an uncooperative object in low Earth orbit, he said. “I think that we will be on schedule for 2023 with a demonstration mission.”

The company plans to raise more money over the next few years to build a fleet of four vehicles to start offering de-orbiting services by 2025. Usov said de-orbiting is the low hanging fruit because it is a way to immediately help satellite operators make money.

Operators currently take geostationary satellites out of service to a graveyard orbit six to eight months before they are out of fuel. De-orbiting services would allow operators to keep the satellites in operation for several additional months and continue to generate revenues, Usov said. Those extra revenues would more than pay for the $10 million to $15 million de-orbiting service.

Usov expects de-orbiting services will be about 60% to 70% of the company’s business. He is also courting operators that are planning to build new satellites and engineering them for future life extension services so they can stay in operation for 20 years or more.

NSR analyst Hussain Bokhari warned that despite enthusiasm for in-orbit servicing, the lack of clear technical and safe operation standards could hinder the industry.

Usov agrees. “On-orbit servicing ecosystem won’t be possible without clear standards for both technology and security issues,” he said.

That work is now being done by the Consortium for Execution of Rendezvous and Servicing Operations (CONFERS), an industry-led effort to develop technical and operations standards for on-orbit satellite servicing, rendezvous and proximity operations.

Standards will make the development of on-orbit servicing technology “more sustainable and transparent to all of the players and to the public as well,” said Usov. One of the concerns are dual-use vehicles that could be mistaken for anti-satellite weapons.

“We look to the future of on-orbit servicing with optimism,” Usov said.