A Senate committee approved a bill Nov. 18 that gives the Commerce Department authority for civil space traffic management (STM), but it still faces significant obstacles to win passage in Congress this year.
SpaceNews 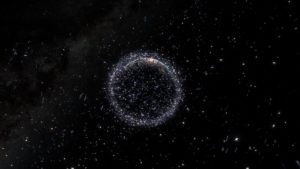 WASHINGTON — A Senate committee approved a bill Nov. 18 that gives the Commerce Department authority for civil space traffic management (STM), but it still faces significant obstacles to win passage in Congress this year.

The Senate Commerce Committee favorably reported S. 4827, the Space Preservation and Conjunction Emergency (SPACE) Act of 2020, on a voice vote during a brief markup session by the committee. There was no debate on the bill by any members of the committee, who approved 10 other bills during the same session.

The bill, introduced Oct. 21 by committee chairman Sen. Roger Wicker (R-Miss.), would put into law elements of Space Policy Directive 3, the policy signed by President Trump in June 2018 that directs the Commerce Department to take over civil STM responsibilities from the Defense Department. The Commerce Department has been working to implement that policy, but slowed by a lack of funding appropriated by Congress.

The version of S. 4827 approved by the committee differs from what Wicker introduced. The new version no longer has a provision elevating the Office of Space Commerce to the Bureau of Space Commerce led by a Senate-confirmed assistant secretary. Proponents of giving the department civil STM work have argued the current office, located within NOAA, should be elevated to a bureau to give it more authority and higher visibility. The new version does include a “sense of Congress” provision stating that elevating the office could enhance its ability to carry out the STM mission.

The new version of the bill now includes a section authorizing the creation of one or more “Centers of Excellence for Space Situational Awareness” led by universities or nonprofit organizations. The centers would work on “transdisciplinary research” on improving space traffic management involving both technology and policy.

The revised version of the bill now has two co-sponsors: Sens. Maria Cantwell (D-Wash.) and Kyrsten Sinema (D-Ariz.), the ranking members of the full committee and its space subcommittee, respectively.

The bill still must pass the full Senate, most likely through a mechanism known as unanimous consent that allows for expedited passage of bills so long as no senator objects. Notably, one committee member, Sen. Mike Lee (R-Utah), requested during the markup that he be recorded as voting “no” on three bills, including S. 4827, but did not explain why he objected to the bills.

If the bill makes it through the Senate, the House would then have to pass it. In a Nov. 16 interview, Rep. Kendra Horn (D-Okla.), chair of the House space subcommittee, said that while she agreed that space traffic management was an important issue, she doubted the House would have time to take up the bill given other priorities, including appropriations bills and a COVID relief package. “It is something that we really need to tackle,” she said, “but just being realistic, I would guess it’s not something that will rise to the top.”