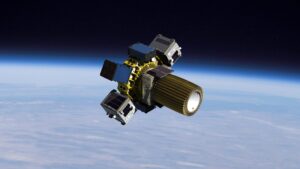 The first vehicle, designated Sherpa-FX, is scheduled to launch no earlier than December on a SpaceX Falcon 9 rideshare mission. Sherpa-FX will carry 16 spacecraft for customers including NASA, the University of South Florida, and startups Loft Orbital, HawkEye 360, Astrocast and iQPS Inc.

“If we previously had been focused on the Earth-to-orbit part of the equation, Sherpa lets us tackle the next stage, which is Earth orbit to anywhere in cislunar space,” Bonin said in an interview.

Spaceflight is one of several companies developing orbital transfer vehicles to speed satellites to their target destination after launch. Startups Momentus, Firefly Aerospace, D-Orbit and Exotrail are also developing orbital transfer vehicles, which aim to fill the gap between dedicated smallsat launchers and heavy lift rockets that carry smallsats as secondary payloads.

Sherpa-FX builds off the lessons Spaceflight learned in 2018 with its SSO-A launch when it herded 64 smallsats onto a Falcon 9 rocket.

That launch, while successful, was difficult to arrange because of constantly changing customer readiness levels, and later became a space situational awareness conundrum when operators had difficulty finding their spacecraft after separation from Falcon 9’s upper stage.

Sherpa-FX is the first of Spaceflight’s Sherpa Next Generation program, Sherpa-NG. The second Sherpa-NG is projected to launch in February on another Falcon 9 rideshare, Bonin said. Spaceflight is still selecting launches for the next two Sherpas, he said.

Sherpa is initially designed to carry up to 300 kilograms of customer payloads, he said. The December Sherpa will stay in low Earth orbit, but Bonin said future vehicles could carry satellites to the geostationary arc, the moon, or even interplanetary destinations such as Venus.

“The missions that we are doing next year will demonstrate longevity approaching one year, and our requirements envelop missions that are three years and beyond,” he said. “Longer term, our ambitions are the inner solar system.”

Spaceflight is initially focused on chemical propulsion for Sherpa, since early use cases call for getting customers “out of the soup” from launches that leave satellites a few hundred kilometers above Earth where they still experience some atmospheric drag, Bonin said. The company selected startup Benchmark Space Systems to provide a green propulsion system for Sherpa.