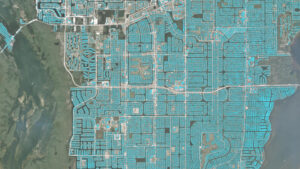 Competitors in SpaceNet 7 the Multi-Temporal Urban Development Challenge will have two months starting August 31st to devise change-detection algorithms to track building construction over time. Winning entries are scheduled to be announced in December at the virtual Neural Information Processing Systems conference.

For the challenge, Planet is supplying monthly imagery over a period of two years for more than 100 locations covering 40,000 square kilometers on six continents.

“SpaceNet is a precursor to open-sourcing geospatial data to the community,” Jonathan Evens, Planet machine learning and Basemaps product manager, told SpaceNews. “We want to be part of that.”

In addition, if Planet wants to promote development of new methods to monitor change in its data, SpaceNet is “an amazing conduit for that,” he added.

Since SpaceNet was formed in 2016 by Maxar Technologies and In-Q-Tel’s CosmiQ Works, the nonprofit has created an online repository of free satellite imagery and labeled training data to encourage development of algorithms designed specifically for remote sensing data. SpaceNet shares data through Amazon Web Services.

While unveiling its latest challenge, SpaceNet leaders also are taking stock of the organization’s accomplishments.

People in 82 countries have downloaded SpaceNet datasets. Over four years, the nonprofit has received 3,000 submissions to its data-science challenges from people in 34 countries.

SpaceNet, a project conceived by Maxar and CosmiQ Works, “turned into a global effort that has a pretty substantial following in all the areas that you might expect that are focused on [artificial intelligence] research and computer vision,” Lewis said.

“We wanted to advance the state of the art for our industry but also to broaden exposure and get excitement from the broader technology community,” said Todd Bacastow, Maxar senior director and SpaceNet Advisory Council co-chair.

By clearing away some of the obstacles, SpaceNet has revealed “broad hunger within the space community to make these resources open to serve as a foundation for future product development,” Lewis said.

In addition, SpaceNet challenges have attracted people who do not usually work in the space or aerospace industry. Some of the people participating in SpaceNet challenges previously worked primarily with medical or automotive datasets, Lewis said. “That’s been a huge sign of success,” he added.

Over the years, SpaceNet has continually heightened the technical complexity of each challenge by increasing various elements like the geographic diversity of datasets or by asking competitors to detect new objects, like roads as opposed to buildings.

“We want to keep pushing novel datasets and difficult challenges, because that’s what we’re hearing researchers, government, academia and companies want us to,” Lewis said. “Hopefully can serve as an early indicator for them of what will eventually come down the road in their product development.”