SpaceX is preparing for a busy schedule of Dragon missions carrying cargo and crew to the International Space Station through next year, a manifest that will make at least some use of reused spacecraft.
SpaceNews 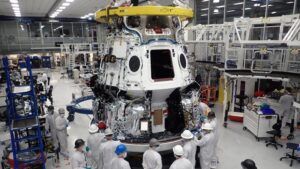 WASHINGTON — SpaceX is preparing for a busy schedule of Dragon missions carrying cargo and crew to the International Space Station through next year, a manifest that will make at least some use of reused spacecraft.

At a Sept. 29 NASA briefing, Benji Reed, senior director of human spaceflight programs at SpaceX, said that schedule of missions means there will be at least one Dragon spacecraft, and sometimes two, docked to the station continuously through the end of 2021 after the launch of the Crew-1 Crew Dragon mission, currently scheduled for Oct. 31.

“This really is a new era for us as a company at SpaceX, and also for commercial space in general,” he said.

Reed said that the current manifest projects seven Dragon missions will launch in the next 14 months, including three Crew Dragon missions. The Crew-1 mission will be followed next spring by the Crew-2 mission, for which NASA has already assigned astronauts from the U.S., Europe and Japan. A Crew-3 mission would follow late next year, although NASA has not announced plans for it.

There will also be four Dragon cargo missions, starting with the CRS-21 mission scheduled for launch in November. Those missions will use the same spacecraft design as the Crew Dragon missions instead of the original cargo version of Dragon flown on past cargo missions to the station. That will enable the cargo Dragon to directly dock with the station, rather than be grappled by the station’s robotic arm and berthed to the station.

The CRS-21 mission will also mark the first time two Dragon spacecraft are in space at the same time. That mission will remain docked to the station for 35 days before returning to Earth. After that, the Crew-2 astronauts will board the Crew Dragon and relocate it from its original docking port, called Node 2 Forward, to the neighboring Node 2 Zenith port. That would free up the Node 2 Forward port, which offers a more straightforward approach to the station, for an uncrewed Boeing CST-100 Starliner test flight tentatively scheduled for late this year.

Flying seven Dragon missions in 14 months will require some degree of spacecraft reuse, Reed said. “A number of them are reused flights, and a handful of them are new,” he said, but didn’t immediately know how many of the missions will use previously flown spacecraft. NASA and SpaceX previously said they would refurbish the Dragon flown on the Demo-2 test flight this summer for the Crew-2 mission. Both Crew-1 and possibly Crew-3 will use new spacecraft, he said.

“What we’re doing right now is assessing the right way to do all of those in the most efficient manner we can, and make sure we have the right amount of margin in the schedule between refurbishment and the need for flight,” he said.

Dragon refurbishment takes place at a SpaceX facility at Cape Canaveral, Florida, which also processes those spacecraft for launch. “Our goal is to be able to do all of Dragon processing at the Cape,” he said. “They’re able to work multiple Dragons through there at the same time, and do refurbishment.”

NASA is not the only customer for the Crew Dragon spacecraft. SpaceX has announced contracts with Axiom Space for missions to the ISS and with Space Adventures for a free-flyer mission. There has been speculation that an Axiom Space mission, perhaps with actor Tom Cruise among its crew, could launch to the station as soon as October 2021 on a short-duration stay.

Reed didn’t comment on any specific plans for such commercial missions, beyond that they were not included in the manifest of seven NASA missions planned through 2021. “I think that late next year is a good time to start looking towards starting those missions up,” he said.