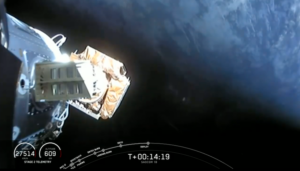 Falcon 9 lifted off at 7:19 p.m. Eastern, from Cape Canaveral Air Force Station in Florida, overcoming a 60% chance of a weather delay from extensive cloud cover. The rocket deployed the Saocom-1B synthetic aperture radar satellite for the Argentine space agency CONAE approximately 14 minutes after liftoff, followed by the Tyvak-0172 smallsat and PlanetiQ’s Gnomes-1 commercial weather smallsat about an hour after liftoff.

SpaceX was waiting to launch until after United Launch Alliance completed the Delta 4 Heavy launch of the National Reconnaissance Office’s NROL-44 satellite, also from Cape Canaveral. However, a ULA mission abort triggered three seconds before liftoff Aug. 29 delayed that mission by a minimum of seven days, creating an opportunity for SpaceX to launch first.

SpaceX landed the Falcon 9’s first-stage booster on land at Cape Canaveral’s Landing Zone 1, recovering that booster for a fourth time. The company plans to recover the rocket’s payload fairing halves out of the Atlantic Ocean, since SpaceX’s usual fairing recovery ships were deployed in different locations for a since-scrubbed Starlink Falcon 9 mission.

SpaceX was attempting to launch two Falcon 9 missions from Cape Canaveral Aug. 30, starting with a batch of its own Starlink broadband satellites at 10:12 a.m. Eastern, but inclement weather delayed that mission until at least Sept. 1.

SpaceX intended to launch Saocom-1B in March, but was delayed at CONAE’s request because of the coronavirus. Synthetic aperture radar startup Capella Space planned to launch a satellite on that mission as a rideshare, but shifted its satellite to a dedicated flight on a Rocket Lab Electron because of that delay. Capella Space’s Sequoia satellite is scheduled to launch no earlier than Aug. 30 at 11:05 p.m. from Rocket Lab’s New Zealand launchpad.

Brig. Gen. Doug Schiess, commander of the 45th Space Wing, which oversees Florida space coast launch ranges, said Aug. 25 during a video call with reporters that SpaceX requested to launch Saocom-1B on the polar trajectory from the Cape instead of from Vandenberg Air Force Base in California, as originally planned.

“Some of their processing was here and it made more sense,” Schiess said.

Polar orbits are popular for weather and remote sensing satellites to enable coverage of the Earth’s full surface. SpaceX launched the first Saocom satellite, Saocom-1A, into a polar orbit from Vandenberg in October 2018 on a Falcon 9.

The Aug. 30 launch of Saocom-1B completes Argentina’s Saocom system, comprised of twin 3,000-kilogram satellites equipped with L-band phased array antennas that can image day and night and through clouds.

CONAE signed its launch contract with SpaceX for the Saocom satellites in 2009, for launches expected in 2012 and 2013, but the Saocom program experienced setbacks that prevented meeting those launch targets.

In an interview, Raúl Kulichevsky, technical director at CONAE, said the Saocom satellites proved more difficult to build than expected for INVAP, Argentina’s state-owned satellite manufacturer, since the company had never built a radar satellite before.

“It was a more challenging mission than we expected at the beginning,” he said.

The Argentine government, which sought to avoid a default on its ballooning national debt during the 2010s, didn’t always fund the Saocom program “exactly at the time that we needed it,” Kulichevsky said.

One of the most challenging technical parts of the program was building an L-band phased array antenna for each satellite, Kulichevsky said. CONAE was in charge of developing the antenna, and partnered with the National Atomic Energy Commission of Argentina to work together on the element.

“They have a very strong research and development branch on materials,” Kulichevsky said of the National Atomic Energy Commission. “When we started the design of the antenna, we signed an agreement with them” to test new materials and evaluate some component mechanics.

“The quality of the image that we obtained with the Saocom-1A is very amazing,” he said. “There are a lot of companies and governmental [entities] in Argentina that are very interested in the information that Saocom can provide to them.”

In addition to domestic use, Argentina uses the Saocom satellites as part of the Italian/Argentine satellite system for emergency management, or SIASGE, which pairs CONAE’s two Saocom satellites and Italy’s four Cosmo-Skymed first-generation satellites, enabling more rapid imagery collection of fires, earthquakes and other natural disasters.