A SpaceX Falcon 9 launched 143 small satellites for a wide range of customers Jan. 24 on the company’s first dedicated rideshare mission, a service that poses a competitive threat to emerging small launch vehicles.
SpaceNews 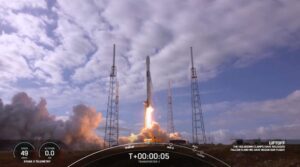 WASHINGTON — A SpaceX Falcon 9 launched 143 small satellites for a wide range of customers Jan. 24 on the company’s first dedicated rideshare mission, a service that poses a competitive threat to emerging small launch vehicles.

The Falcon 9 lifted off from Space Launch Complex 40 at Cape Canaveral Space Force Station in Florida at 10 a.m. Eastern, a launch delayed one day by poor weather. The first stage, making its fifth launch after being previously used for NASA and commercial launches, landed on a droneship off the northern coast of Cuba.

The rocket’s second stage started deploying satellites 59 minutes after liftoff into sun-synchronous orbits, a process that took more than a half-hour to complete. The 143 satellites on what SpaceX called the Transporter-1 mission were the most deployed on a single launch, breaking the record of 104 set by an Indian Polar Satellite Launch Vehicle (PSLV) mission in February 2017.

Transporter-1 is the first dedicated rideshare mission for SpaceX’s overall smallsat rideshare program, which also provides secondary payload opportunities on Starlink and other launches. SpaceX worked directly with satellite operators as well as several rideshare aggregators, including D-Orbit, Exolaunch, Nanoracks and Spaceflight, to fly payloads on the mission. The large number of satellites posed a challenge for U.S. Space Command, which tracks satellites and other objects in orbit.

Planet is the largest single customer in terms of number of satellites launched, with 48 of its Dove cubesats. Of those, 36 were contracted directly with SpaceX with the other 12 through other companies. Swarm launched 36 of its SpaceBee satellites by working with two different payload aggregators.

The diversity of payloads meant that some competitors shared a launch. Iceye launched three of its synthetic aperture radar (SAR) imaging satellites on this mission, alongside two SAR satellites from Capella Space and one from Japanese SAR company iQPS. Astrocast launched five satellites to provide internet-of-things services similar to what Swarm is offering, while Kepler launched eight satellites for its constellation that provides internet-of-things and other communications services.

Some other customers of the launch were Spire, which launched eight new cubesats for weather and vessel tracking services; HawkEye 360, which launched three satellites for its commercial signals intelligence service; and NASA, which launched four technology demonstration cubesats. Neither SpaceX nor the aggregators released full manifests of the satellites on the Transporter-1 mission prior to liftoff.

SpaceX also added 10 of its Starlink satellites to the mission. These will be the first to operate in polar orbits, after the Federal Communications Commission granted permission Jan. 8 to use polar orbits for those 10 satellites to test providing broadband internet access at high latitudes.

Transporter-1 could have had even more payloads. Two DARPA satellites that were to fly on the mission to test technologies for its Blackjack program were damaged during payload processing in early January. Momentus delayed plans to launch its first Vigoride tug, carrying several cubesats, to a future SpaceX rideshare mission, citing delays in getting regulatory approvals.

SpaceX announced its rideshare program in August 2019, offering low-cost launch opportunities for smallsats with a mix of dedicated missions and secondary payloads on rideshare missions. It started allowing customers to book launches directly through its website in February 2020.

SpaceX seeks to provide a regular cadence of launches through that program, intended to provide “competitive pricing and increased flight opportunities on board the world’s most advanced and proven launch vehicles,” Andy Tran, host of the SpaceX webcast, said. “If you’re ready to fly during the scheduled launch period, you will fly.”

That rideshare program could pose a threat to small launch vehicles now in service or about to enter service, which can’t provide the same pricing. Those companies have increasingly emphasized responsiveness, including their ability to place payloads into the customer’s preferred orbit and on their preferred schedule.