A SpaceX Falcon 9 launched another set of 60 Starlink satellites March 11 as the company expanded international service in several countries.
SpaceNews 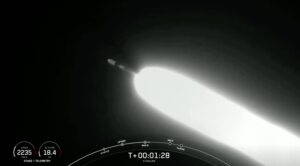 WASHINGTON — A SpaceX Falcon 9 launched another set of 60 Starlink satellites March 11 as the company expanded international service in several countries.

The Falcon 9 lifted off from Space Launch Complex 40 at Cape Canaveral Space Force Station at 3:13 a.m. Eastern. The rocket’s upper stage deployed its payload of 60 Starlink satellites 65 minutes after liftoff.

The rocket’s first stage successfully landed on a droneship eight and a half minutes after liftoff. That booster was on its sixth flight, having previously flown missions ranging from the Demo-2 commercial crew test flight in May 2020 to, most recently, the Transporter-1 rideshare mission Jan. 24.

As SpaceX expands the Starlink satellite constellation, the company is also expanding the coverage for its ongoing beta test of the broadband internet service those satellites provide. The company originally limited the beta test to the northern tier of the continental United States, later expanding it to include southern Canada and parts of the United Kingdom.

During the webcast for this Starlink launch, the company said it is now expanding its service in the U.K., which had been limited to southern England, to the rest of England, Scotland and Wales. SpaceX is also starting service in western Germany and the South Island of New Zealand, with plans to expand in both countries in the coming weeks.

SpaceX has kept expectations low for the beta test, called “Better Than Nothing” by the company, with average speeds of 50 to 150 megabits per second and occasional outages. In online forums, though, some users have reported much higher speeds at times, exceeding 300 megabits per second, but still with intermittent outages.