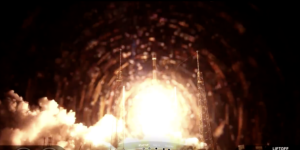 The Falcon 9 carried the Lockheed Martin-built GPS 3 Space Vehicle 4 — the 4th satellite of the GPS 3 constellation that provides positioning, navigation and timing signals to military and civilian users.

About eight and a half minutes after liftoff, the Falcon 9’s brand-new first stage touched down on the “Of Course I Still Love You” droneship off the coast of Florida in the Atlantic Ocean.

This was SpaceX’s second attempt to launch SV 4. The mission was aborted Oct. 2 two seconds before liftoff.

SpaceX vice president Hans Koenigsmann told reporters Oct. 28 that the engine anomaly that triggered the automatic abort was caused by material that blocked a relief valve in the engine’s gas generator, which powers the engine’s turbo pumps. The last-second abort prevented a hard start of the engine, he said, which could have damaged it.

The new GPS 3 satellite will join the constellation of 31 spacecraft that operate in medium Earth orbit at an altitude of 12,550 miles in six orbital planes. Each satellite circles the Earth twice per day.

The Nov. 5 mission was SpaceX’s third launch of a military GPS 3 satellite under the National Security Space Launch program. The first was on Dec. 23, 2018 and the second one took place on June 30, 2020.

The booster landing was the second time SpaceX recovered the Falcon 9 main booster in a National Security Space Launch mission.

The company is under contract to launch two more GPS 3 satellites next year. SpaceX will use previously flown boosters in the next two launches for Space Vehicles 5 and 6 of the GPS 3 constellation.

The booster recovered Nov. 5 will be refurbished and flown again to launch the GPS 3 Space Vehicle 5 in mid-2021. Lockheed Martin said the satellite was delivered and was declared “available for launch” in May 2020. It will be placed in storage until next summer.