SpaceX reiterates its claim made in a May 2019 protest that the Air Force harmed the company by denying it a Launch Service Agreement award.
SpaceNews 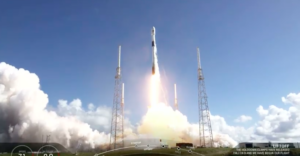 WASHINGTON — SpaceX in a court document filed Aug. 19 says it is pressing on with a legal complaint against the U.S. Air Force over contracts awarded in October 2018 to United Launch Alliance, Northrop Grumman and Blue Origin.

In a “joint notice” document that also includes the Air Force’s response, SpaceX reiterates its claim made in a May 2019 protest that the Air Force gave an unfair advantage to the other companies by awarding them Launch Service Agreements and excluding SpaceX.

The Air Force on Aug. 7 announced that SpaceX and ULA were selected as the winners of the National Security Space Launch Phase 2 launch service procurement, with ULA getting 60% of national security launches over five years and SpaceX 40%.

Although Blue Origin and Northrop Grumman did not win Phase 2 contracts and SpaceX did, the company insists that the Air Force’s October 2018 decision caused SpaceX “irreparable harm” and gave ULA a key advantage in winning the larger share of Phase 2 launches.

The purpose of the LSA agreements was to help Phase 2 competitors pay for launch vehicle development and infrastructure. SpaceX competed for an award but did not get one.

In the Aug. 19 document — filed with the U.S. District Court for the Central District of California — SpaceX says the Aug. 7 award does not change the underlying reason for the original protest.

SpaceX is challenging Air Force actions that occurred prior to the start of the Phase 2 competition, the Aug. 19 filing says. “The August 7, 2020 Phase 2 competition awards do not impact the substantive challenges asserted by SpaceX to the competition and award decision under the Launch Service Agreement.”

Although the Phase 2 award “mitigated the harm to SpaceX resulting from the unlawful and flawed LSA award decisions, substantial harm to SpaceX remains,” says the document. “Unlike its competitors, SpaceX competed in the Phase 2 competition without the benefit of government investment and technical information exchanges under the LSAs.”

SpaceX is asking the court to rule the LSA awards improper which would compel the Air Force to end the $967 million six-year agreement with ULA. The agreements with Blue Origin and Northrop Grumman would end anyway because they did not win a Phase 2 contract.

“Given the impending terminations, enjoining the further use of such LSAs harms no one,” says the filing. ULA having that agreement “may well have contributed to ULA winning 60% of the Phase 2 launches.”

The Air Force and ULA in a joint statement point out that SpaceX argument is unreasonable because its LSA bid sought funding for the development of the Big Falcon Rocket, not the Falcon 9 or the Falcon Heavy that it offered for the Phase 2 procurement.

“For Phase 2, SpaceX did not propose the Big Falcon Rocket (“BFR”) that they proposed for the LSA, but rather proposed a modified Falcon Heavy to meet the Category C requirement,” said the statement.

The Air Force and ULA also challenged SpaceX’s assertion that since Phase 2 has been awarded, there would be no disruption to national security if ULA’s LSA agreement were terminated. “If the Court vacated ULA’s LSA, the unplanned deficit in federal development funding under the LSA could delay the readiness for ULA’s Vulcan to perform Phase 2 launches.”