Warning: sprintf(): Too few arguments in /home/customer/www/spacemirror.com/public_html/wp-content/themes/newsphere/lib/breadcrumb-trail/inc/breadcrumbs.php on line 254

Microsoft will offer mobile cloud computing data centers that can be deployed anywhere in the world and connect to SpaceX’s Starlink and SES’ O3B internet satellites.
SpaceNews 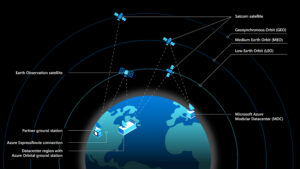 WASHINGTON — Microsoft on Oct. 20 announced it is expanding its cloud computing services for the space industry. The company will offer mobile cloud computing data centers that can be deployed anywhere in the world and connect to SpaceX’s Starlink and SES’ O3b internet satellites.

The service is part of Microsoft’s space-focused cloud business called Azure Space. It’s aimed at private industries and government agencies that use data collected by satellites but don’t want to invest in the ground infrastructure to process and analyze the data.

Microsoft last month rolled out Azure Orbital, a “ground-station as a service” that competes with Amazon’s AWS Ground Station. These services connect satellites directly into the cloud computing networks. Azure Orbital initially only connected with remote-sensing imaging satellites but is now being expanded to connect with communications satellites in low, medium and geosynchronous orbits.

Azure’s mobile cloud computing unit called a “modular data center” is aimed at customers like military forces or industries such as agriculture and energy who operate in “challenging environments” where there is no infrastructure, said Tom Keane, corporate vice president of Microsoft Azure Global.

SpaceX and SES will provide point-to-point connectivity. “You don’t need fiber, you basically talk to the satellites that we have in orbit, the satellites will talk to each other and get that data to the other point on Earth where it’s needed,” Gwynne Shotwell, SpaceX president and chief of operating officer, said in a pre-recorded interview with Keane.

J.P. Hemingway, CEO of SES Networks, said the company is forging permanent ties with Microsoft Azure by building antennas for its new O3b broadband constellations near Azure cloud sites around the world.

“I think the satellite industry needs to disrupt itself,” Hemingway said in a pre-recored interview. “We need to embrace more orchestration, more virtualization, we need to be able to have a seamless orchestration across cloud content and connectivity, and we need an ecosystem to do that within.”

Microsoft on Tuesday also announced the Azure “orbital emulator” — a digital environment for satellite developers to simulate constellation designs and test artificial intelligence algorithms. The technology was developed for U.S. government agencies and is now being offered commercially.