A second prototype of SpaceX’s Starship reusable launch vehicle performed a suborbital flight Feb. 2, only to crash while landing.
SpaceNews 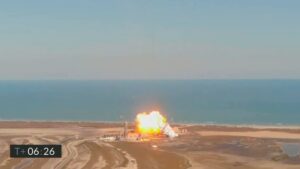 WASHINGTON — A second prototype of SpaceX’s Starship reusable launch vehicle performed a suborbital flight Feb. 2, only to crash while landing.

The Starship SN9 vehicle lifted off at about 3:25 p.m. Eastern from SpaceX’s Boca Chica, Texas, test site. SpaceX planned to fly the vehicle to an altitude of 10 kilometers before landing on a pad at the test site.

The liftoff and ascent of the vehicle went as expected, according to commentary on the SpaceX webcast by company engineer John Insprucker. The vehicle reached the 10-kilometer mark four minutes after liftoff and, after hovering briefly, flipped to a horizontal orientation to glide back to the landing pad.

As it neared the pad, Starship flipped back to the vertical and ignited its engines. However, only one of the three Raptor engines ignited, and the vehicle appeared to swing past the vertical. The vehicle crashed at close to a 45-degree angle and exploded 6 minutes and 26 seconds after liftoff.

The flight was almost identical to Starship SN8’s flight Dec. 9. That vehicle made what appeared to be a largely successful flight until landing, when an engine failed to ignite and the vehicle came in too quickly, exploding as it hit the pad. However, on that flight the vehicle was in the proper vertical orientation for landing, rather than at an angle as with SN9’s attempted landing.

“We had again another great flight up to the 10-kilometer apogee,” Insprucker said on the webcast after the crash. “We demonstrated the ability to transition the engines to the landing propellant tanks. The subsonic reentry looked very good and stable like we saw again last December.”

“And again, we’ve just got to work on that landing a little bit,” he added, emphasizing that the launch was a test flight.

SpaceX received approval for the flight from the Federal Aviation Administration less than 24 hours earlier. The agency suspended launches from Boca Chica after SpaceX’s SN8 flight. SpaceX had sought a waiver to a maximum public risk requirement in its launch license, but proceeded with the flight even though the FAA rejected the waiver request.

Depending on the outcome of the analysis in the SN9 crash, SpaceX could move ahead quickly in the overall Starship test program. The next prototype, SN10, arrived at the test site Jan. 29. Insprucker said that SN10 is being prepared for a “similar flight later this month.”