SpaceX launched its latest set of Starlink satellites Jan. 20, bringing the total number of spacecraft launched so far for that broadband constellation to more than 1,000.
SpaceNews 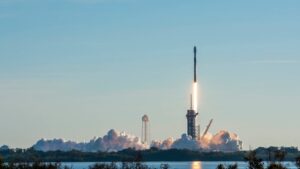 WASHINGTON — SpaceX launched its latest set of Starlink satellites Jan. 20, bringing the total number of spacecraft launched so far for that broadband constellation to more than 1,000.

The Falcon 9 lifted off at 8:02 a.m. Eastern from Launch Complex 39A at the Kennedy Space Center. The rocket’s upper stage deployed the payload of 60 Starlink satellites 65 minutes after liftoff.

The rocket’s first stage, making its eighth flight, landed on a droneship in the Atlantic Ocean. SpaceX cautioned during the webcast of the launch that the potential for high ground-level winds made the landing an “envelope expansion” attempt. However, the stage landed without incident in the center of the droneship.

The launch was the first time SpaceX flew a booster eight times. The booster, first used to launch the Demo-1 commercial crew test flight in March 2019, was most recently flown on the SXM-7 launch Dec. 13. The 38-day turnaround time between launches is also a record for the shortest time between flights of the same booster.

With this launch, SpaceX has now delivered 1,015 Starlink satellites into orbit, dating back to the two “Tintin” prototypes launched in February 2018. Of those 1,015, 951 are still in orbit, according to statistics maintained by spaceflight observer Jonathan McDowell.

SpaceX ramped up deployment of Starlink last year, with 14 launches. The rapid growth of the constellation has alarmed astronomers, who are concerned that Starlink and other megaconstellations could disrupt their observations.

Speaking during a session of the 237th Meeting of the American Astronomical Society Jan. 14, Patricia Cooper, vice president of satellite government affairs at SpaceX, argued that the company has taken major steps to reduce the impact of Starlink satellites on astronomy over the last year.

“We at SpaceX have certainly enjoyed what I would call a thoughtful and creative technical collaboration with an ever-widening group of astronomers,” she said, resulting in a “deeper and fuller technical understanding of the intersection of the satellite constellation sector and specific projects affect ground-based astronomy.”

The goal of the VisorSats is to reduce the brightness of the Starlink satellites to magnitude 7 or fainter. Observations of those satellites that have reached their final orbit, though, indicate they have an average magnitude of 6.5, said Pat Seitzer of the University of Michigan during the conference session.

Cooper said SpaceX is committed to continue to work with astronomers to mitigate the effect of Starlink, but also emphasized the benefits of the system. “It’s important to keep the purpose of this disruption to astronomy, from your perspective, in context of the goal of the constellation we’re deploying, which is broadband connectivity,” she said.

“This collaboration needs to continue,” she added, because those discussions are “what’s getting us to a much better, more successful way of coexisting.”