SpaceX is seeking regulatory permission to connect moving vehicles to its rapidly expanding Starlink constellation, branching the broadband network out of fixed homes and offices.
SpaceNews 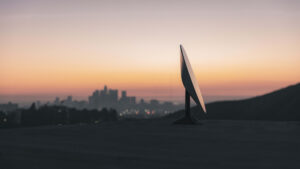 The company is asking the FCC for authorization similar to the blanket license it already has for up to a million end-user customer Earth stations.

David Goldman, SpaceX’s director of satellite policy, said in a regulatory filing that its Earth Stations in Motion (ESIM) equipment is “electrically identical to its previously authorized consumer user terminals but have mountings that allow them to be installed on vehicles, vessels and aircraft, which are suitable for those environments.”

SpaceX recently told the FCC it has more than 10,000 Starlink users in the United States and abroad, after launching more than 1,100 high-speed internet satellites.

The possibility of diversifying into more markets will raise eyebrows in the satellite mobility industry, as Elon Musk’s launch company continues to raise sizable funding rounds to back its capital-intensive plans.

Satellite operators Inmarsat, SES and Intelsat are among those likely to feel the most disruption in the land-mobile market, Northern Sky Research principal analyst Brad Grady said.

Depending on the exact form factors and use cases, Grady said mobile-satellites service (MSS) businesses at Inmarsat and Iridium Communications might see disruption akin to when maritime products transitioned to very-small-aperture terminals (VSATs).

However, antenna maker Kymeta and other players in the communications on the pause (COTP) market segment are likely to feel more of an impact from early Starlink adoption.

“Right now, there really isn’t a high-bandwidth/low latency form factor solution for that market segment that would match the terminal form factor of Starlink,” Grady said.

“Perhaps once [SES’ next-generation constellation] mPower and their terminal segment develops in the next couple of years will see another competitor there, but the COTP market is a far easier nut to crack in my view.”

Almost all other non-GEO high-throughput satellite (HTS) constellations have been diversifying into other markets, and Grady said investors and industry have already “priced-in” Starlink as a competitive threat, potential partner or solution as they prepare for its eventual entrance.

Last year, SpaceX sought FCC permission to test Starlink services on private jets, as well as the vessels its rockets land on for reuse.