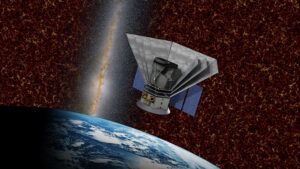 NASA awarded a contract to SpaceX for the launch of the Spectro-Photometer for the History of the Universe, Epoch of Reionization, and Ices Explorer (SPHEREx) spacecraft on a Falcon 9 in June 2024. The value of the launch contract is $98.8 million, which includes the launch itself and other “mission-related costs,” the agency said.

NASA selected SPHEREx as the latest mission in its Medium-Class Explorers, or MIDEX, line of astrophysics missions in 2019. The spacecraft will fly a near-infrared spectrometer to perform a full sky survey every six months over a mission designed to last at least two years, collecting data on phenomena from planetary to cosmological scales.

SPHEREx, managed by NASA’s Jet Propulsion Laboratory, entered Phase C of its developing in January. While the mission was originally scheduled to launch in 2023, JPL said last month the mission is now scheduled to launch between June 2024 and April 2025, a delay in part because of the effects of the pandemic. SPHEREx will cost $242 million, a figure that does not include the value of the launch contract.

The contract values for those missions have varied significantly, from $50.3 million for IXPE to $117 million for Psyche. Among Falcon 9 launches, the SPHEREx mission is among the most expensive, with only IMAP more expensive at $109.4 million.

SPHEREx is a small spacecraft, with an estimated mass of less than 200 kilograms. That suggests the Falcon 9 will have significant excess capacity, which NASA may use for flying smallsat secondary payloads as part of a rideshare initiative. The IMAP launch in 2025, for example, will include NASA’s Global Lyman-alpha Imagers of the Dynamic Exosphere (GLIDE), Lunar Trailblazer and Solar Cruiser smallsat missions and the Space Weather Follow-On L-1 spacecraft for NOAA.