“Over the next 18 months we’ll complete the transition to a fully reusable SpaceX fleet for our national security missions,” said Col. Robert Bongiovi, director of the Space and Missile Systems Center’s Launch Enterprise.
SpaceNews 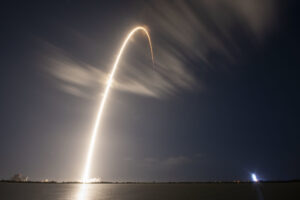 WASHINGTON — The U.S. Space Force expects to clear SpaceX to use previously flown boosters for all national security missions. So far the Space Force only has agreed to allow reused boosters in two GPS launches scheduled in 2021 but the plan is to make the entire fleet reusable by 2022.

“Over the next 18 months we’ll complete the transition to a fully reusable SpaceX fleet for our national security missions,” Col. Robert Bongiovi, director of the Space and Missile Systems Center’s Launch Enterprise, said Nov. 19.

The Falcon 9 rockets that launched two military GPS satellites June 30 and Nov. 5 both had brand-new boosters which the company recovered after launch. After renegotiating its contract with the Space Force, SpaceX will use the recovered boosters from the June and November launches to fly two more GPS satellites in 2021.

Speaking on Thursday at an Air Force Association’s Mitchell Institute online forum, Bongiovi said the renegotiated deals saved the government $65 million over the four GPS launches in 2020 and 2021.

The Space Force transition to a reusable fleet is significant because up until now SpaceX was required to fly brand-new boosters for national security missions. The company routinely recovers and reuses rocket hardware in its commercial and NASA launches, but the Space Force needed time to figure out a process to certify previously flown boosters.

Bongiovi said the Space Force Launch Enterprise lays stringent “mission assurance” requirements on launch providers to minimize the risk of losing expensive payloads in failed launches. He said the SpaceX Falcon fleet has improved its processes and increased its reliability.

United Launch Alliance and SpaceX were selected Aug. 7 as the Space Force’s primary launch providers from 2022 to 2027.

Besides the transition to a reusable SpaceX fleet, another key goal for the Launch Enterprise, said Bongiovi, is to get ULA’s new vehicle, the Vulcan Centaur, certified for its first national security mission in 2022.

Bongiovi said he remains concerned about the setbacks suffered by ULA’s Delta 4 Heavy rocket in attempting to launch the NROL-44 mission for the National Reconnaissance Office.

“I think this is an unfortunate delay,” he said.

The vehicle carrying a classified spy satellite has been sitting on the ground at Cape Canaveral, Florida, since the first launch attempt Aug. 29 ended with a hot-fire abort.

“We never like to have a launch vehicle and a satellite sitting so long,” Bongiovi said. “But we need to make sure we launch when we’re ready,” he said. The priority is to “make sure this launch is successful.”

After the Aug. 29 abort there were other attempts that also ended in scrubs due to problems with the ground equipment and bad weather.

ULA said it continues to test the hardware and is taking a broad look at the Delta 4 ground equipment both at Cape Canaveral and at Vandenberg Air Force, California.

The company has not yet announced a new target launch date for NROL-44.

ULA is under contract to fly NROL-44 and four more Delta 4 Heavy missions for the NRO over the next four years before the vehicle is retired.

“We’ve always had fly-out concerns on the Delta 4 Heavy,” said Bongiovi. However, he said, the risk of moving sensitive NRO payloads to another launch vehicle is “much higher than the risk of flying out Delta 4 Heavy. I still think that’s true.”