The FAA said that SpaceX violated the conditions of a launch license for its Starship vehicle during a launch in December, prompting an investigation that delayed tests of another vehicle.
SpaceNews 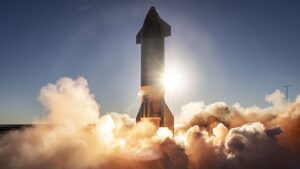 WASHINGTON — The Federal Aviation Administration said that SpaceX violated the conditions of a launch license for its Starship vehicle during a launch in December, prompting an investigation that delayed tests of another vehicle.

In a Feb. 2 statement, the FAA said that SpaceX had requested a waiver to its FAA license for suborbital test flights of its Starship vehicle before the Dec. 9 flight of the Starship SN8 vehicle. That waiver, the FAA said, would have allowed SpaceX to “exceed the maximum public risk allowed by federal safety regulations.”

The FAA denied the request, but SpaceX went ahead with the launch. SpaceX considered the flight successful, although the vehicle exploded upon landing. No injuries or third-party damage was reported during the flight, but the FAA determined that SpaceX violated the conditions of its license by proceeding without the waiver.

“As a result of this non-compliance, the FAA required SpaceX to conduct an investigation of the incident,” the agency stated. “All testing that could affect public safety at the Boca Chica, Texas, launch site was suspended until the investigation was completed and the FAA approved the company’s corrective actions to protect public safety.”

SpaceX had hoped to launch its next Starship prototype, SN9, on a similar suborbital flight Jan. 28, but that launch was postponed. The FAA said at the time it was still evaluating unspecified modifications to its launch license. “We will approve the modification only after we are satisfied that SpaceX has taken the necessary steps to comply with regulatory requirements,” the agency said in a Jan. 29 statement.

The FAA approved that modification late Feb. 1, concluding that “SpaceX complies with all safety and related federal regulations and is authorized to conduct Starship SN9 flight operations in accordance with its launch license.” It did not elaborate on any modifications or waivers to that license. SpaceX did not respond to questions about the issue.

FAA regulations require companies with reusable launch vehicle licenses, like SpaceX’s Starship, to meet an “expected casualty” limit for the uninvolved public of no more than 0.0001 per launch, or one casualty per 10,000 launches. The risk to any one individual cannot exceed one in one million.

Many in the space industry were surprised that SpaceX would violate the conditions of a launch contract. “If a licensee violates the terms of their launch license, they did so knowing that an uninvolved member of the public could have been hurt or killed. That is not exaggeration. They took a calculated risk with your life and property,” said Jared Zambrano-Stout, a former deputy chief of staff and senior adviser with the FAA’s Office of Commercial Space Transportation, which handles launch licensing.

In a series of tweets Feb. 2, he argued that SpaceX violating its license with little or no penalty could have lasting ramifications for the industry. “If the FAA does not enforce their launch licenses, it will damage the long-term viability of the launch industry and damage their credibility with Congress. It is possible that the industry could suffer significant regulatory burdens enforced by Congress to ensure safety.”

The FAA is allowing SpaceX to proceed with the Starship SN9 launch, which is expected no earlier than Feb. 2 from Boca Chica.