SpaceX secured contracts Jan. 13 for the launches of a commercial lunar lander mission backed by NASA as well as a privately funded satellite to track methane emissions.
SpaceNews 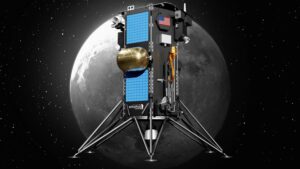 WASHINGTON — SpaceX secured contracts Jan. 13 for the launches of a commercial lunar lander mission backed by NASA as well as a privately funded satellite to track methane emissions.

Intuitive Machines announced that it selected SpaceX for the launch of its IM-2 lunar lander mission on a Falcon 9 rocket no earlier than 2022. IM-2 will land in the south polar region of the moon carrying payloads arranged through the agency’s Commercial Lunar Payload Services (CLPS) program in October.

The IM-2 mission will fly a drilling experiment called Polar Resources Ice Mining Experiment 1 (PRIME-1), which will look for water ice below the lunar surface. Intuitive Machines said that, besides the PRIME-1 drill, two other NASA technology payloads will fly on the lander.

Intuitive Machines also selected SpaceX for its first lander mission, IM-1. That spacecraft is scheduled to launch later this year as one of the first two CLPS lander missions. Both missions will use a lander design called Nova-C.

“Launching Nova-C on a rocket with a proven record of reliability and outstanding value is an assurance to NASA and our commercial payload customers that IM is dedicated to sticking the landing in back-to-back moon missions,” Steve Altemus, president and chief executive of Intuitive Machines, said in a company statement.

Intuitive Machines is one of three companies that have received NASA CLPS awards so far. Masten Space Systems, which won a CLPS lander mission to the south polar region of the moon in April 2020, selected SpaceX in August to launch its XL-1 lander. Masten said at the time that its SpaceX contract does not cover a specific launch vehicle, but rather a service to get the spacecraft to the moon on the company’s desired schedule.

Astrobotic, which won an initial CLPS award alongside Intuitive Machines in May 2019, will fly that mission on the inaugural launch of United Launch Alliance’s Vulcan Centaur in late 2021. Astrobotic won a CLPS award in June for delivering NASA’s VIPER lunar rover to the south pole of the moon in late 2023, but has not announced the launch vehicle for that mission.

In a separate announcement, MethaneSAT, a subsidiary of Environmental Defense Fund (EDF), said it will launch its eponymous satellite on a Falcon 9 in October 2022. The spacecraft will launch through SpaceX’s smallsat rideshare program, project spokesman Jon Coifman said.

“SpaceX offers the readiness and reliability we need to deliver our instrument into orbit and begin streaming emissions data as soon as possible. We couldn’t ask for a more capable launch partner,” Steven Hamburg, MethaneSAT project colead, said in a statement.

The 350-kilogram satellite, being built by a team that includes Ball Aerospace and Blue Canyon Technologies, will perform high-resolution mapping of methane emissions, helping scientists and environmental advocates identify sources of the greenhouse gas from oil and gas industry facilities. EDF will make data from MethaneSAT freely available.

EDF received a $100 million grant Nov. 16 from the Bezos Earth Fund, which the organization will use for activities that include the completion and launch of MethaneSAT. The fund, which plans to spend $10 million on climate change initiatives, was established by Jeff Bezos, founder of Amazon and launch vehicle company Blue Origin.