SpaceX’s Transporter-1, a rideshare mission scheduled to launch Jan. 23 could set a new record for the most satellites ever launched in a single flight.
SpaceNews 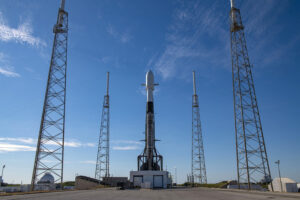 WASHINGTON — U.S. Space Command’s traffic watchers have been working with SpaceX and satellite operators in recent days in preparation for Transporter-1, a rideshare mission scheduled to launch Jan. 23 that could set a new record for the most satellites ever launched in a single flight.

Space Command crews at Vandenberg Air Force Base, California, will attempt to track as many as 143 commercial and government satellites that Transporter-1 will deploy to a sun-synchronous orbit 500 kilometers above Earth.

The 18th Space Control Squadron, which monitors satellites and space debris for close approaches, has been coordinating with SpaceX and the satellite owners and operators “to understand the launch plan for Transporter-1 and the satellite deployment sequence so that we can provide optimal spaceflight safety support,” Diana McKissock, a space situational awareness officer at the 18th SPCS, said in a statement to SpaceNews.

Transporter-1 is SpaceX’s first dedicated commercial rideshare on a Falcon 9 rocket. This will be a record-breaking ride with 143 satellites, beating India’s PSLV-C37 launch of 104 satellites in February 2017.

The ability to track so many payloads from a single launch is a concern for satellite watchers. “One of the problems is that we don’t even know for sure what all of the 143 satellites are,” spaceflight analyst and astronomer Jonathan McDowell told SpaceNews. “It’s certainly going to be a challenge to sort them all out,” he said. SpaceX has not released a detailed manifest for this rideshare “which is disappointing,” said McDowell.

McDowell said there are a couple of experiments on this mission to test RFID tags that will identify satellites. “If those eventually get wide adoption it will make these large cluster launches easier to track.”

Some information has emerged on the satellites flying on Transporter-1. The largest customer on this mission is Planet, with 48 SuperDove satellites hitching a ride to space. There are 10 of SpaceX’s own Starlink internet satellites and 36 very small satellites from Swarm Technologies which is building an internet-of-things service with “SpaceBee” spacecraft the size of a slice of bread. Another payload riding on Transporter-1 is Spaceflight’s SHERPA-FX — a new type of spacecraft that will dispense 18 secondary payloads.

The competitive pricing and reliability of SpaceX rideshares make them an attractive option for small satellite operators so these bulk launches are expected to become routine. Experts note that consolidating dozens of smallsats from multiple customers on a single flight is efficient but has implications for spaceflight safety that have yet to be sorted out.

A new report by the Aerospace Corp. warns that single  deployments of small payloads — some the size of a shoebox — can create confusion for space traffic controllers. Current space traffic management systems “do not have time to react to the addition of so many new space objects all at once,” the report says. It can take weeks or months to identify objects and some may never be identified at all.

Aerospace Corp. engineer Mark Skinner said the industry should agree on the adoption of standards to make smallsats identifiable. “This needs to become part of the marketplace,” he said on a recent webinar.

If 100 satellites are launched at once, said Skinner, “you might be left with 25 or so that aren’t identified, at least for the first several months.”

Andrew Abraham, also of Aerospace Corp., said cubesats and nanosatellites “all look the same to a ground radar.” Some companies put ID devices on their satellites using optical tags, blinking lights or GPS trackers. But there are no clear regulations or guidelines even as private companies and governments plan to send thousands more satellites to orbit in the coming years.

The job of the 18th SPCS would be easier if all satellites had ID tags “but they can’t regulate it or require it,” said Abraham. “This is a role for a civilian agency.”

The 18th Space Control Squadron as a public service provides satellites’ positional data and conjunction warnings to satellite operators. It also helps facilitate data exchange between operators. But McKissock noted that spaceflight safety is the responsibility of the launch provider and the satellite operators.

The Trump administration in 2018 directed the Department of Commerce to provide a basic level of space situational awareness for public and private use based on the space catalog compiled by the Department of Defense. Both agencies are working on a transition plan but it could take Commerce several more years to establish the capabilities it needs to manage space traffic.