Among the 143 satellites on Transporter-1 were technology demonstrations and payloads of interest to the U.S. military, including satellite components, in-space laser communications and remote sensing.
SpaceNews 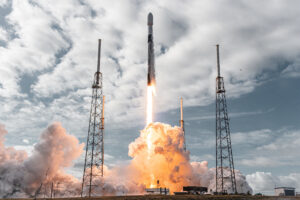 WASHINGTON — Among the 143 satellites that flew to orbit Jan. 24 on SpaceX’s record-breaking rideshare were technology demonstrations and payloads of interest to the U.S. military, including satellite components, in-space laser communications and remote sensing.

Other smallsats that flew on SpaceX’s Transporter-1 were laser communications payloads — known as optical inter-satellite links — that allow satellites to pass massive amounts of data to other satellites and to ground stations. Germany’s Tesat-Spacecom sent to orbit a laser communications terminal the company claims is the smallest in the industry, weighing less than a pound.

Tesat-Spacecom spokesman Matthias Motzigemba told SpaceNews the company plans to test the optical communications payload for up to two years and conduct experiments aimed at building a global network of space and ground nodes.

Motzigemba said he could not disclose the customers for these terminals but said Tesat currently supplies optical inter-satellite links to U.S. companies building low-Earth orbit constellations.

The Pentagon’s Space Development Agency is especially interested in lightweight laser communications terminals for the fleet of LEO satellites it plans to deploy over the next few years. DARPA and SDA were hoping to launch two optical inter-satellite link cubesats on Transporter-1 but the satellites were accidentally damaged at the payload processing facility.

SDA Director Derek Tournear commented in a social media post that losing those two satellites was “painful” and that Transporter-1 would have had 145 satellites on board if the two laser comms payloads had made it.

SpaceX in this mission flew 10 of its own Starlink internet satellites equipped with laser links. The U.S. military plans to use Starlink to connect airplanes and other platforms, and optical inter-satellite links are preferred because they are more cyber secure than traditional radio-frequency communications.

The unprecedented number of small satellites launched by SpaceX in a single flight is drawing attention to the challenges of managing space traffic as orbits become more congested.

Satellite tracker and astrophysicist Jonathan McDowell said Transporter-1 included satellites from 24 different owners and operators, most from the United States and a handful from 10 other countries.

Concerns about spaceflight safety are creating opportunities for startups like Kayhan Space Corp., which developed cloud-based software to help military and commercial satellite operators plan maneuvers so they can avoid collisions.

“There is a lot of room for improvement in tracking of space objects,” Kayhan Space CEO and co-founder Siamak Hesar told SpaceNews. Today it is difficult to precisely establish the location of small objects like cubesats, he said. As rideshares become more frequent, said Hesar, the 18th Space Control Squadron and civilian organizations will need better tools to manage the congestion and avoid costly mishaps.