Spire Global will launch its first cubesats with cross links over the next few months, beginning a refresh that will eventually replace its full constellation.
SpaceNews 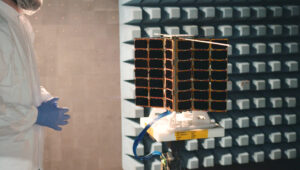 WASHINGTON — Spire Global will launch its first cubesats with cross links over the next few months, beginning a refresh that will eventually replace its full constellation.

“We will be adding inter-satellite links to the constellation,” Spire CEO Peter Platzer told SpaceNews. “It will be rolled out to encompass the whole constellation over the next one to two years.”

The first cross-link-equipped satellites are booked on upcoming launches of SpaceX’s Falcon 9, Northrop Grumman’s Antares, and a Soyuz, he said.

Spire provides weather, ship-tracking and aircraft-tracking data through a constellation of around 90 cubesats in low Earth orbit, each of which must wait until passing over a ground station before it can downlink data. Platzer said that process takes tens of minutes to accomplish, which is too slow for some customers.

“If you want to drive the latency down further, you have to do inter-satellite links,” he said. “That’s a technology we have been working on.”

Inter-satellite links allow satellites to act as relays, using lasers or radiofrequency transponders to beam data across to each other and down to ground station antennas, shortening the time between data collection and delivery to customers.

Platzer wouldn’t say if Spire’s links are optical or radiofrequency-based, but said they should reduce the wait time to tens of seconds. The San Francisco-based company is building the links and integrating them into its satellites, which it also builds in-house, he said.

Platzer said Spire will retain its network of around 70 ground station antennas to ensure redundancy even with the cross links.

Platzer said Spire has introduced other upgrades over the past year, including an increase in design life to three years, up from two years. Spire also used software upgrades to add artificial intelligence and machine learning abilities to its fleet so satellites can process data before sending it to the ground, he said.

Spire plans to maintain its constellation at its current size of roughly 90 satellites for the next several years, Platzer said. Spire relies on atmospheric drag to deorbit its satellites once they have reached end of life.