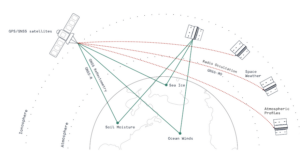 Spire’s merger with special-purpose acquisition company NavSight values the company at $1.6 billion. The deal gives Spire about $475 million in cash to accelerate data-gathering and analysis operations across maritime, aviation, weather, climate and other markets.

Spire plans to list on the same exchange under ticker SPIR this summer after shareholder and regulatory approvals – faster than a traditional route to becoming public that can take anywhere from six to 18 months.

The company has been considering a public listing for a year and a half, CEO and founder Peter Platzer told SpaceNews.

Spire spoke with “a substantial number of SPACs” during that time, Platzer said, before hitting it off with NavSight CEO Bob Coleman and CFO Jack Pearlstein in November.

“This partnership will allow us to accelerate our market capture by investing in sales, marketing, and product development, and taking full advantage of the deep experience and relationships Bob and Jack bring to the table,” he said.

In addition to their experience as public company executives, Platzer said Coleman and Pearlstein bring strong connections in the government market, an important customer group for Spire.

Coleman, who has a history of founding and leading solutions providers for the intelligence community and Department of Defense, is an advisory board member for the National Defense Industrial Association.

Pearlstein has more than 25 years of operating experience in the technology sector and, until June 2020, was CFO of public relations software company Cision.

Surging popularity for SPAC deals in the investment community is creating a gold rush for commercial space companies, which tend to have sizable capital expenditure needs.

Unlike some that have jumped on the SPAC bandwagon, however, decade-old Spire generates revenues with a constellation of more than 100 satellites that it builds in-house.

It recorded about $36 million in unaudited recurring revenues in 2020, according to a Spire investor presentation, and expects to nearly double that this year. It also posted an $18 million gross profit last year (non-GAAP), expecting that to climb to $830 million in 2025 on nearly $1.2 billion in recurring revenues.

Since 2012, Spire has secured around $180 million in capital from investors that include Bessemer Venture Partners, RRE Ventures, Scottish Investment Bank, Seraphim Capital and Lemnos. It now employs about 250 people, including around 140 engineers and scientists.

Platzer said the transaction enables it to pursue a more aggressive timetable for its “space-as-a-service” growth model, where customers operate their own payloads and use their own software for accessing the data collected by its Lemur satellites.

BlackSky, which provides Big Data analysis with a network of imagery and geospatial intelligence satellites, announced a SPAC deal Feb. 18 that values it at around $1.5 billion.

Rocket Lab, which has launched some of Spire’s spacecraft, announced its own SPAC-fueled plans March 1 to go public. The group will use proceeds to develop a larger launch vehicle called Neutron, which will help serve growing demand for satellite constellations such as Spire.

Analysts expect many more SPAC deals to come for an industry that has long pined for sizable exits, which are key for newspace to continue attracting capital across the value chain.

However, the frenzy of activity also raises concerns about a potential bubble in the space community.

The trend marks an inflection point for the newspace ecosystem, according to David Cowan, a partner of Bessemer Venture Partners that currently owns about 6.5% of Spire.

“Not only [do SPACs] unlock public pools of capital, but we should now expect a huge uptick in venture capital investment behind the next-generation of space startups.”

“The newspace industry really lends itself to the SPAC proposition given the giant addressable markets for these companies,” Boggett said.

“The first movers and the emerging category leaders can accelerate their vision whilst fully funding their growth plans through a single efficient transaction … It’s great to see the SPAC focus broadening beyond the launch category and I expect we’ll see a sharp increase in further newspace SPAC announcements as we progress through 2021.”