Starburst Aerospace announced plans Oct. 1 to expand its presence in India as it prepares to establish an accelerator there.
SpaceNews 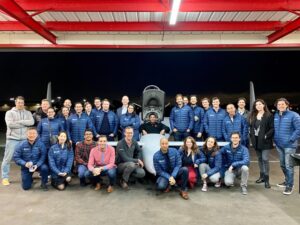 SAN FRANCISCO – Starburst Aerospace announced plans Oct. 1 to expand its presence in India as it prepares to establish an accelerator there.

“The market in India is opening up,” Francois Chopard, Starburst CEO and founder, told SpaceNews by email. “New space and defense opportunities are being created by entrepreneurs and scientists who are highly skilled and supported by the Indian government and space agencies.”

Starburst, a company founded in Paris in 2015, is well known for establishing business accelerators around the world and events to introduce corporations and government agencies focused on aerospace and defense with startups. To date, 215 startups have participated in Starburst programs like the Techstars Starburst Space Accelerator, which was based in Los Angeles before the COVID-19 pandemic forced it online.

As part of its Indian expansion, Starburst plans to establish an innovation center in Mumbai and to conduct outreach in Delhi, Bangalore and Hyderabad through partners in the aerospace and defense community.

“We’re at the beginning of the developmental phase in India with respect to privatization of the aerospace and defense ecosystem,” said Abhi Anuket, Starburst India managing partner and CEO. “We believe that India will be an important contributor to the ecosystem at large.”

Starburst plans to launch an early-stage business accelerator in India to connect young companies with its global network of partners in government and industry. Starburst India is looking for corporate partners, aerospace and defense investors, government agencies, academic organizations and startups interested in joining the effort.