Albedo, the latest space company to join the Y Combinator startup accelerator, plans to establish a satellite constellation offering Earth imagery with a resolution of 10 centimeters per pixel.
SpaceNews 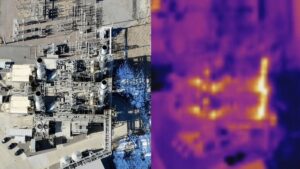 That’s the same resolution that caused a stir when former President Trump tweeted images of a heavily damaged Iranian launchpad in August 2019. At the time, geospatial imagery experts suggested the imagery was probably obtained by classified NRO reconnaissance satellites that cost more than $1 billion dollars. (NRO satellite prices and capabilities are classified.)

“There are new technologies we can use today to fly super low to achieve this resolution in an affordable manner,” Topher Haddad, Albedo co-founder and CEO told SpaceNews.

For example, Denver-based Albedo plans to equip satellites with electric propulsion and design them for on-orbit refueling. Haddad said he is confident refueling will be available in low Earth orbit by the time Albedo needs to refuel its first generation of satellites approximately two years after launch.

“Our goal is to grow the market by making imagery affordable and by adding the immense value of high resolution,” Haddad said.

While 10-centimeter imagery cannot currently be sold in the United States commercially without a special license, Haddad is confident that Albedo will face few restrictions by the time it begins launching satellites in 2024 and establishes a constellation of 24 satellites in 2027.

The trio began focusing on Albedo full time when they joined Y Combinator, a seed startup accelerator based in Mountain View, California, whose space industry alumni include Astranis, Momentus and Relativity Space. Y Combinator invests in the startups it selects.

Albedo “has a ton of work to do,” said Eric Migicovsky, Y Combinator Partner. “If they can build at the speed they are planning and get to the quality level, I could see this being a no-brainer for customers.”

“Talking to customers in the last few months has definitely validated that there is strong demand for this,” Haddad said.

Once Albedo has established a constellation of 24 satellites in orbit, the company plans to offer customers imagery that can be updated two to three times a day.