A survey of military organizations funded by ViaSat reveals that many don’t have access to modern communications technology despite growing availability of commercial satellite services.
SpaceNews 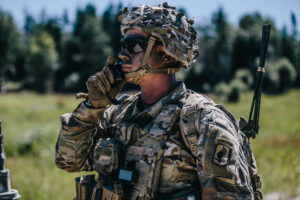 WASHINGTON — A survey of military organizations reveals that many don’t have access to modern technologies to communicate and share data despite growing availability of commercial satellite services.

Participants said the Defense Department and the U.S. armed forces are not taking advantage of increasingly more capable and cheaper commercial satellite communications services. Agencies are aware of what the market has to offer but are reluctant to use commercial systems in many cases due to cultural inertia and because many commercial systems are incompatible with the government’s legacy architecture, according to a summary of the survey released Dec. 10.

The survey was conducted in September by the Government Business Council — a division of Government Executive Media Group — and satellite operator ViaSat. The 195 responses came from a random sample of U.S. active military and Defense Department civilians.

There is a lot of “cultural complacency” in military procurement agencies that are comfortable working with the traditional defense industrial base, Ken Peterman, president of Viasat’s government systems business, told SpaceNews.

Peterman said using commercial services could save the government money but agencies are not doing apples-to-apples price comparisons. “Decades of acquisition policy and practices create a culture predicated on the invention of technology,” he said. “It’s time to transition to one that assesses commercial technologies in a warfighter context.”

Some military organizations are exploring the capabilities of commercial systems and Congress has advocated for the use of private-sector space services by the Defense Department. “However Congress succumbs to the lobbying pressure of the defense industrial base that wants to buy legacy platforms,” said Peterman.