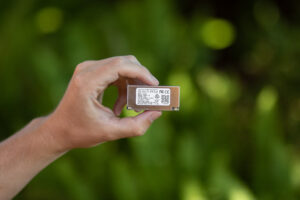 “Swarm is now live commercially,” Ben Longmier, Swarm co-founder and chief technology officer, told SpaceNews. “We have a bunch of commercial customers on the network. They’re putting our satellite data modem into their devices and transmitting.”

Since it was founded in 2017, Swarm has focused on establishing a low-cost commercial data service. Customers pay $119 for Swarm Tiles, low-power modems to embed in devices, in addition to $5 per device per month for Swarm service.

“This is all slow data speeds,” Longmier said. “We are offering one kilobit per second at this really low price point where people can afford data connectivity anywhere in the world.”

“What it’s done for us is it’s reduced the cost of gathering data from remote locations,” said Bruce Trevarthen, LayerX Group founder and CEO. Before Swarm established a commercial network, a LayerX customer paid about 450 New Zealand dollars ($324) for a satellite communications service that costs about 15 New Zealand dollars on Swarm’s network.

“You can imagine what that does to the viability of data collection,” Trevarthen said. “Data points that would previously be ignored because of the cost of retrieval are now suddenly viable.”

Of the 81 Swarm satellites in orbit, 72 are transmitting data commercially, including 36 launched in January on a SpaceX Falcon 9 rocket. By the end of the year, Swarm plans to finish establishing a constellation of 150 commercial satellites to provide continuous global coverage.

As the constellation grows, data traffic is increasing. Swarm transmitted six times as many data packets during the fourth quarter of 2020 compared with the third quarter, according to a Feb. 9 news release.