SAR satellites can gather data day and night, but the resultant imagery is typically more expensive, less available, and more difficult to use than optical imagery. Technological advances are breaking down those barriers, positioning SAR for much more widespread adoption, according to experts.
SpaceNews 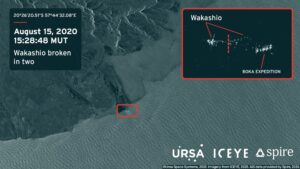 “We were really happy,” said Steven Ward, the director of geospatial sciences at The Climate Corporation, a San Francisco-based subsidiary of life sciences and pharmaceutical giant Bayer that leverages satellite imagery to help farmers boost crop yields and insure against weather-driven losses. “We actually had a Slack channel where we were celebrating that launch.”

The Climate Corporation processed 600 million satellite images in 2019, most of it optical, Ward said. The company hasn’t integrated synthetic aperture radar, or SAR, imagery into its Climate FieldView product line yet, but is studying how radar, which can peer through clouds, could fill gaps left by optical satellites over notoriously cloudy regions like Brazil, Indonesia and the Niger delta, he said.

“We’re getting bits and pieces of the story of the field,” Ward said. “What adding SAR data into the mix does is it fills in the gaps. We’re missing chapters, and it’s filling in those chapters.”

SAR satellites can gather data day and night, and through all weather conditions, but the resultant imagery is typically more expensive, less available, and more difficult to use than optical imagery.

Technological advances, as much on the ground as in space, are breaking down those barriers, positioning SAR for much more widespread adoption, according to experts.

“For the first time in history, the ground segment is ready, the cloud computing is ready, and the SAR satellite systems are ready,” said Alexis Conte, a Euroconsult analyst specialized in the geospatial sector. “It is promising.”

Before joining Euroconsult in 2017, Conte worked for France’s agriculture ministry where it proved challenging to get SAR imagery quickly because cloud computing was still nascent, he said. Now, SAR customers can easily use cloud platforms like Amazon Web Services, Conte said, or access imagery through web portals from SAR providers Maxar Technologies and Airbus Defence and Space that include analytical tools to process SAR data.

A wave of startups including Capella Space, Iceye, iQPS Inc., PredaSAR, Umbra Labs and Synspective have launched or are preparing to launch SAR smallsats that promise faster revisit times and lower costs, he said.

“They are going to drive the market,” Conte said of the several smallsat SAR constellations in the offing. “They are lowering the price because the [capital expenditure for] each satellite is very low.”

SAR DEMAND ON THE INCREASE

So many new constellations are in development that the U.S. National Geospatial Intelligence Agency conducted a study this year to better understand the state of commercial SAR, said Jared Newton, the special projects officer for NGA’s source commercial and business operations group.

“The U.S. commercial market has really sprung up hot and heavy in the last couple of years, so we had to go back and re-look at opportunities that we think we could apply SAR commercial capabilities,” he said.

“We definitely see expanded opportunities for private sector SAR, particularly RADAR LOVE as that demand for unclassified and sharable geoint has increased,” he said.

NGA will use those findings to inform requirements for the National Reconnaissance Office, the U.S. spy satellite agency responsible for acquiring imagery needed for military and intelligence operations.

The European Union’s maritime safety agency, EMSA, also sees an increasing need for SAR data, particularly for its Copernicus Maritime Surveillance program, which provides Earth-observation products to member governments for law enforcement, fishery management, pollution monitoring, and other applications. The European Union’s 27 member states plus Iceland, Liechtenstein, Norway, and Switzerland are entitled to use the agency’s SAR-derived products, EMSA said in a written response to questions from SpaceNews.

“The demand for [SAR] services has been increasing as users acknowledge the added value of this tool for maritime surveillance when offered in near real time,” EMSA said.

“The objective of EMSA is to maintain access to as many missions as possible and a portfolio of providers as large as possible to be able to address all requests at any time,” the agency said.

THE NORMALIZATION OF SAR

While defense and intelligence agencies remain the largest consumers of SAR imagery, commercial applications are the fastest growing segment of the market, Conte said. Customers in agriculture, energy, finance, infrastructure and other sectors are all adopting SAR, which they often use in ways that are complementary to optical imagery, he said.

Geospatial data customers accustomed to optical imagery often view SAR as an add-on, not a substitute, for other information sources. The Climate Corporation hopes to add SAR to infotech products that already incorporate data from weather instruments, farm machinery and optical satellites to provide an even fuller understanding of crop health, Ward said. No single source of data provides the whole picture, he said.

Combining SAR with other data helps Ursa sell imagery products to customers in a wide variety of industries, many of which weren’t familiar with SAR until recently, he said.

“In oil and gas, our customers were very used to optical, but now having SAR has become a selling point,” said Maher.

SAR satellite operators face the two-pronged challenge of making potential customers aware of their imagery, and making their imagery readily usable for those customers.

Ursa is one of the “larger consumers” of SAR data, Maher said, relying on e-Geos, SI Imaging Services, Iceye and others for imagery that it feeds into analytics dashboards for provide rapid change detection alerts.

Maher said demand for SAR is coming from virtually every industry. “Being able to understand what’s going on in parts of the world that are not easily accessible to optical satellites is really important,” he said.

Putting SAR imagery to work does come with challenges, Maher added. Details that are obvious in optical images are easy to miss in SAR images without special training or software designed to interpret the data, he said.

To the untrained eye, a SAR image looks like a “bunch of black and white speckled dots,” Maher said. Ursa focuses heavily on training computer algorithms to detect objects of interest from those images, he said.

Even geospatial specialists at The Climate Corporation had a tough time interpreting radar imagery they were working with as part of the company’s recent SAR suitability study, Ward said.

“The data is big and unwieldy, and it doesn’t come cleanly packaged. Even some of my most well versed and best remote sensing scientists didn’t have a lot of experience working with radar data,” he said. “There was a learning curve there because so many institutions focused on teaching purely optical imaging, but we’re seeing a bit of a shift there.”

When it comes to understanding SAR, Euroconsult’s Conte said the onus should lay more heavily on SAR providers to deliver data products their customers understand.

“The operator will have to be educated about end-user expectations and first get a good knowledge about their world in order to deliver the appropriate services,” he said.

Getting familiar with new customers and their markets will help the satellite industry communicate about SAR to an even larger audience, Ursa’s Maher said.

This article originally appeared in the Sept. 14, 2020 issue of SpaceNews magazine.