SpaceNews contributor Leonard David discussed space debris and other issues with Moriba Jah, associate professor at The University of Texas at Austin, a specialist on space situational awareness, space traffic monitoring, and the hazard of orbital debris.
SpaceNews 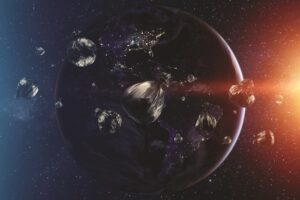 Earth is encircled by derelict spacecraft, the remains of exploded rocket stages, and myriad bits of orbiting debris — from tiny chips of paint to the lingering leftovers of past but purposeful anti-satellite tests. Collectively, such high-speed clutter and other litter-causing activities heighten the risk of damaging or short-circuiting the performance of functional spacecraft.

The debris threat is a recognized reality. Outer space has already been termed a “tragedy of the commons” in the making. What avenues need to be taken to curb creation of orbiting rubble, help pinpoint the prospect of space collisions, and — above all — become better stewards of sustaining a quality space environment?

SpaceNews contributor Leonard David discussed these issues with Moriba Jah, associate professor at The University of Texas at Austin, a specialist on space situational awareness, space traffic monitoring, and the hazard of orbital debris.

There was significant media attention paid last month to a potential orbital collision between an old Soviet satellite and a Chinese upper stage rocket body, flagged by LeoLabs, a tracking company. It didn’t happen, but any lessons learned from that incident?

Evidence is best when it can be independently corroborated. To me, the LeoLabs issue could have happened with any other entity when opinion is just based on that entity’s own data. This is the importance of crowdsourcing. There’s need for a consensus of opinions. That’s the direction we need to go in. It’s bad news if we desensitize people as it could become a Chicken Little kind of thing. Soon enough people don’t pay attention and say, “Oh, yeah. It’s another nothing burger.” So my sense of urgency is let’s try to independently corroborate an event and then figure out how to move forward from that. I think just getting some answer and then blurting it out will ultimately hurt the community.

You have raised concern that the U.S. military cannot accurately track all satellites and that their current data could be “biased.” Why so?

There are a number of things that actually influence the motion of objects in space. Then there’s a group of things that influence our perception of the motion of things in space. Things like gravity, solar flux, particulates like micrometeoroids, charged particles. Those are external things to anthropogenic space objects. Then you have control of objects, like thrusting, etc. These are the things that actually influence the motion of space objects. But by and large we don’t know all those things perfectly. Our assumptions on the physics are not perfect. The observations we have are inferring behavior. The actual data is corrupted by noise and biases. This is all very nuanced. You need to apply different methods to the same data to see what the statistical consistency is. That way you gain confidence and confidence comes from independent trials. The Defense Department (DoD) does not have all the methods I have described. They have assumptions on the physics. The fact that they model everything like a sphere already says that it can’t be the right answer. The objects in their catalog are modeled like a cannonball and very few of those objects actually look like that. So that’s a bias. It’s a systematic error in the opinion.

There is movement on giving the U.S. Commerce Department a new role in space situational awareness (SSA). What’s your view regarding this prospect?

You think that’s the way it is going to play out?

In testimony before Congress, you’ve advocated for creation of a nonprofit civil space traffic management public-private partnership. Why and how does that work?

There are different people that have a stake in what’s going on in space … all of humanity. There can’t be a single entity that shoulders the burden of the whole thing. There’s not a single government on the planet that can actually provide the continuing supervision in the absence of help from the people that they are authorizing. Government by itself can’t actually meet the needs of the community in space to achieve safety, security and sustainability without the cooperation of the very same entities they are authorizing to operate in space.

I have been developing AstriaGraph, a crowdsourcing, participatory sensing network. It prevents any single source of information from being able to uniquely bias or prejudice your opinion about what happens in space. That’s what we want to get to. We use a variety of data sources. There’s strength in numbers.

Over the years, various concepts for space debris removal have been proposed, be they harpoons, even fishnet-like devices to snag clutter. How practical are these ideas?

I like making an analogy to the ocean. A lot of the items in the oceans can be cleaned up, but things like microplastics are going to be there forever. I think people need to accept that we need to learn how to live within our own filth. A pristine space environment through cleaning will never happen. We need to accept that as reality.

Let me put it in current pandemic terms. How do we flatten the curve on the growth and spread of space debris? The biggest issue is lack of compliance, the equivalent of people not wearing masks and not social distancing. How do we incentivize people to actually comply with guidelines? There are a few things that we can remove out of the way because they are ticking time bombs, super-spreader events such as rocket bodies [that can potentially explode].

What other steps need to be taken?

Before anything else, we need to come up with a global definition of what “carrying capacity” in orbit means. Just like there’s carrying capacity for ecosystems, for highways, what is the equivalent carrying capacity for any given orbit regime? We should also come up with a definition for something like a “space traffic footprint” which is loosely the burden that anything has on sustainability, the safety of other things in space. No single country can just use up the carrying capacity of the orbit because it doesn’t belong to any country. It’s a shared resource. We have to come up with an orbital resource management program, to manage and allocate capacity. Those are the sorts of conversations that can underwrite sensible legislation. But without the sustainability metric, we just don’t get there.

If every country is just free to do whatever it wants in space, and we don’t have modes of behavior to help manage the common resource, then yes, eventually, we’re going to have a tragedy of the commons. That’s just going to happen.

There’s an evolving capability for satellite servicing. How important is that ability?

Because I’m coming to this in part as a space environmentalist, let’s minimize or eliminate single-use satellites. We should have some sort of capability to reuse and recycle objects in space. On-orbit servicing, reuse, recycling services to me is critical in the way that humanity needs to evolve in its use of outer space. But there’s a caveat. We need to also minimize misinterpretation. If somebody comes within close proximity of somebody else, they may feel it’s a threat and claim self-defense. So these are real human behaviors that we’ve displayed on Earth that we need to apply to space, so that we can forecast this a bit and try to prevent these things from happening.

You call yourself a space environmentalist, but why and how do you define that label?

I am a self-titled space environmentalist. I am not saying that tomorrow something cataclysmic is going to happen. But on our current path, space will become unusable if we do nothing different. Our behavior has not been so good for oceans, the atmosphere and climate. Space is suffering that. We are still at a point where we can do something about it. Environmental protection needs to be extended to near-Earth space for sure. That needs to be underscored. I just don’t want to be an alarmist. I just want to be a realist.