Coleman is a member of the Defense Science Board and has held several senior posts in the private sector and academia.
SpaceNews 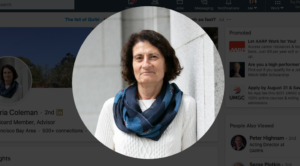 A DARPA spokesman said Coleman will officially join the agency in mid to late September.

Coleman for the past several years has been a senior advisor at the Center for Information Technology Research in the Interest of Society (CITRIS) at the University of California Berkeley. She was previously the CEO of Atlas AI, a public benefit corporation that applies artificial intelligence solutions to sustainable development.

She is a member of the Defense Science Board, a member of Lockheed Martin’s Technology Advisory Group and a member of Santa Clara University’s Advisory Board for the Department of Computer Engineering.

Acting Undersecretary of Defense for Research and Engineering Michael Kratsios welcomed Coleman in a statement.

“During this era of great power competition, DARPA is critical to strengthening the U.S. military’s technological dominance and advancing innovations that benefit our warfighters,” Kratsios said.