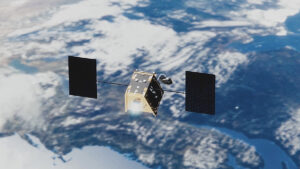 The two satellites will be delivered in 2021 and will be part of the Blackjack demonstration of optical inter-satellite links in orbit, Brown said.

Telesat, a satellite operator based in Canada, plans to build a constellation of 298 internet satellites in low-Earth orbit. The company has not yet selected a bus manufacturer for its constellation so it decided to adapt the Airbus Arrow for the DARPA program so it could meet the delivery schedule.

The 150-kilogram Arrow is a derivative of the spacecraft made by Airbus and OneWeb for the OneWeb constellation.

The two buses that Telesat is making for DARPA are each about 200 kilograms. “We are modifying the Arrow very significantly,” said Brown.

Each spacecraft will carry a military payload and two optical inter-satellite links from two different vendors that Brown said he could not disclose.

This is what makes Blackjack “a real demonstration of how you do interoperability,” he said.

Telesat’s DARPA contract has options worth up to $175.6 million for 20 buses. Brown said that if those options are exercised, Telesat will offer the buses it will produce for its own constellation, which is projected to start launching in 2022. A manufacturer will be announced “very soon,” said Brown.

DARPA plans to deploy 20 spacecraft connected by optical inter-satellite links and demonstrate how the military could use a low-Earth orbit network for communications, missile tracking and navigation.

Telesat is the second bus manufacturer selected for Blackjack. Blue Canyon Technologies in July won a contract to produce four buses for the demonstration, with options for up to 20 buses.

DARPA is keen on demonstrating the ability to connect a mesh network of satellites in space using optical links from multiple manufacturers, Brown said.

Telesat is providing technical advice on optical links to Lockheed Martin for the Space Development Agency’s Transport Layer, which is also a mesh network similar to Blackjack. In Telesat’s constellation each satellite will have four optical links.