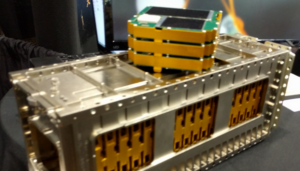 SAN FRANCISCO – ThinSats are starting to catching on.

Still, their most popular application is education. The Feb. 20 Northrop Grumman Antares rocket sending the Cygnus cargo capsule to the International Space Station launched 30 ThinSats as part of a STEM program for middle, high school and university students. The projects from multiple states, including Virginia and Indiana, were overseen by Twiggs Space Lab LLC and sponsored by Virginia Space.

The Antares launched ThinSats into very low Earth orbit Feb. 20 to gather data for one to five days before reentering Earth’s atmosphere.

The very low Earth orbit where ThinSats were deployed is important for climate research and space weather forecasts but difficult to study because of the high levels of atmospheric drag satellites experience, Hank Voss, NearSpace Launch co-founder and ThinSat inventor, said in a statement.

With SBIR funding, NearSpace Launch is building ThinSats for NASA and the U.S. Space Force to serve as technology demonstrators.

NearSpace Launch also is building ThinSats of various sizes to fly alone or link together in a daisy chain.

“You can change the width of ThinSats to make them thicker or thinner” as long as they fit in a cubesat form factor to take advantage of cubesat deployers, Matt Voss said.