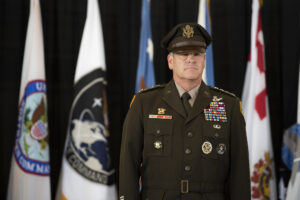 WASHINGTON — It may come as a surprise to some that the nation’s top commander of U.S. space forces is not a member of the U.S. Space Force but a four-star U.S. Army general.

Gen. James Dickinson is the commander of U.S. Space Command, a military combatant command established in August 2019 to oversee all operations that involve satellites in space.

If a U.S. satellite is threatened by a foreign country’s missile or an electronic jammer, it is U.S. Space Command’s responsibility to identify the culprit and advise the Pentagon on how to respond.

Satellites provide the military essential services like early warnings of missile launches, communications and navigation, and it’s the job of U.S. Space Command to “protect and defend what we’re doing in space,” Dickinson told SpaceNews Oct. 30 in his first media interview since being sworn in as the top space commander.

“We have to ensure that we have a safe domain in which to operate,” Dickinson said.

Dickinson is the first Army officer to lead the military’s unified combatant command for space operations headquartered at Peterson Air Force Base, Colorado. His deputy is a Space Force officer, Lt. Gen. John Shaw, whose promotion was recently confirmed by the Senate.

Dickinson said the command’s headquarters is growing rapidly and will have more than 1,000 personnel by next year. For now it will remain in Colorado Spring but there’s a chance it might be relocated pending a Department of the Air Force basing review.

“We’ll await the decision probably early next year, we hope, from the secretary of the Air Force,” he said.

For the first year, the command was led by Gen. John “Jay” Raymond, the chief of space operations of the U.S. Space Force. Dickinson, who previously was the commander of the Army Space and Missile Defense Command in Huntsville, Alabama, was tapped as Raymond’s deputy.

Trump nominated Dickinson for Space Command’s top post in June 2020 and he was confirmed by the Senate on August 6. Until now, all previous space commanders were Air Force generals.

A growing national security concern is that “Russia and China have weaponized space,” he said. “Over the past year, we have been able to hold those folks accountable for what they’re doing in the space domain.”

A congressionally mandated Pentagon report in September warned that China is deploying missiles and electronic weapons that could be aimed at U.S. satellites in low and high orbits.

The command in July called out Russia for testing a space-based anti-satellite weapon. In April, it alleged that Russia test fired an anti-satellite missile that could threaten American satellites. Raymond on February complained about a Russian “inspector” satellite’s orbital maneuvers in the vicinity of a U.S. national security satellite.

U.S. Space Command plans to continue to issue statements of rebuke in response to aggressive behavior, Dickinson said. “We didn’t use to do that” when space was under U.S. Strategic Command.

“What’s changed is that space is the sole focus of this command,” he added. “We want to maintain a peaceful presence within the space domain and hold our competitors accountable for what they’re doing.”

Characterizing and understanding potential threats in space is a “key area I’m interested in,” said Dickinson. “I used to be a missile defense guy,” he continued. In missile defense, “we have to see things in order to understand them. It’s the same thing in the space domain.”

Tracking orbiting satellites and maintaining a public catalog of space objects is one of Space Command’s duties, and some of these space traffic management responsibilities are expected to move under the Commerce Department. “I fully support that transition,” said Dickinson.”Like everything we do with other government agencies, it will have to be a very close relationship.”

Space Command already has started to work with Commerce on “building this concept, and it will continue for many, many years,” he said. “They will ultimately have the responsibility for being able to characterize what’s going on in orbit.” The military will continue to track space objects for national security reasons.

There is a “a lot of close interaction” with Commerce right now, Dickinson said. “There’s a lot of technology we’ll share with them and we’ll work on the processes and procedures.”

Diversity of units at Space Command

The CFSCC provides space support services to the U.S. military and allies, such as GPS navigation and satellite-based communications. It also operates the Combined Space Operations Center (CSpOC) where U.S. and allied personnel track objects and activities in space.

The JTF-SD, commanded by Army Brig. Gen. Thomas James, operates a classified operations hub known as the National Space Defense Center, which his jointly run with the National Reconnaissance Office.

Dickinson said the U.S. Space Force and the U.S. Army will become the primary provider of forces to the combatant command, he said.

What gives strength to U.S. Space Command is that service members from all branches of the military are assigned to it, said Dickinson. “As a combatant command I’m able to integrate all the capabilities regardless of what service.”

Space Command is not Space Force

Dickinson said one of his frequent talking points with audiences is drawing the distinction between U.S. Space Command — the combatant command — and the Space Force, which is the space service branch. That is near the top of the list of “strategic messaging” items, he said.

The space command and the space service were created almost within five months of each other “so it’s expected that there would be a little confusion,” said Dickinson.  “It’s important that we continue to delineate what each does.”

The way to explain this goes back to the Goldwater-Nichols Act of 1986, a landmark piece of legislation that changed how the military is organized.

The law specified that the military services “organize, train and equip” forces for use by the combatant commanders. Consequently, Raymond as the chief of the U.S. Space Force is responsible to recruit, train and equip units. But when these space forces are deployed in actual operations, they are under the command and control of U.S. Space Command.