Launch integration company TriSept has purchased a launch from Relativity Space that it plans to use for a smallsat rideshare mission as soon as 2022.
SpaceNews 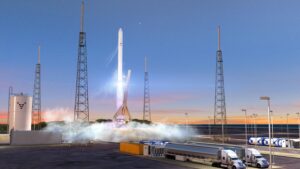 WASHINGTON — Launch integration company TriSept has purchased a launch from Relativity Space that it plans to use for a smallsat rideshare mission as soon as 2022.

TriSept announced the contract Dec. 10 for a launch of Relativity’s Terran 1 rocket no earlier than 2022. The launch will take place either from Cape Canaveral Space Force Station or Vandenberg Air Force Base, depending on the requirements of the mission.

TriSept will use the launch for a rideshare mission, likely featuring a large primary payload and smaller secondary payloads. Jason Armstrong, director of integration services at TriSept, said in an interview that the company was in discussions with a U.S. government agency and international companies to be the primary customer. The international customers, he said, would fly a cluster of smallsats as the primary payload.

The primary customer will drive the launch date and orbit for the mission. “Then we can engage with the rideshare payloads about the opportunity,” Armstrong said, filling out the remaining capacity on the launch with those additional payloads. “I’ve already engaged with a number of them so that, as we build this out going forward, this will be another mission that is available.”

He said the company plans to launch 18 months after signing up the primary customer, then have the rest of the payloads lined up 12 months before launch to allow time for engineering analyses and regulatory processes. However, there may be ways to accommodate payloads within six months of launch.

TriSept has purchased dedicated launches before, such an agreement with Orbex announced in January for a rideshare mission on that company’s Prime rocket under development. The Terran 1, though, is a significantly larger vehicle, capable of placing up to 1,200 kilograms into low Earth orbit, with a first launch from Cape Canaveral expected by late 2021.

“The overall performance capability and volume of the fairing of the Terran 1 open up a different portion of the marketplace,” Armstrong said. “It also allows for us to do cost-sharing in that rideshare approach that gets us to a very attractive price point for both the individual rideshare payloads and that primary tenant. We’re pretty excited what Terran 1 produces for the industry.”

Relativity sees rideshare missions like this as a complement to the company’s overall launch business, which includes agreements with satellite operators such as Iridium and Telesat. “It’s great to have a company like TriSept that has the ability to maximize the utility that our rocket offers,” said Josh Brost, vice president of business development at Relativity, in an interview.

He said Relativity prefers to work with integrator like TriSept rather than try to arrange rideshare missions itself. “The exciting part is to work with a company like TriSept that has deep relationships among both international commercial customers and domestic government customers,” he said. “It provides an opportunity to bring together enough different customers to get another mission closed on our manifest.”