The Trump administration released a new national space policy Dec. 9 that recognizes the U.S. Space Force as the primary organization responsible for defending the nation’s interests in space.
SpaceNews 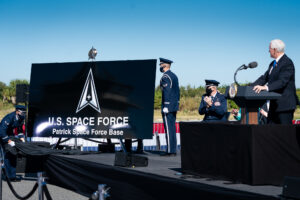 The previous version of the national space policy was issued by the Obama administration in 2010.

The Pentagon in a statement said the new policy document “highlights the Department of Defense as a key agency in implementing and achieving the nation’s goals in this important domain.”

Acting Secretary of Defense Christopher Miller said: “Over the last year we have established the necessary organizations to ensure we can deter hostilities, demonstrate responsible behaviors, defeat aggression and protect the interests of the United States and our allies.”

The policy states that the Space Force, which was established in December 2019, is responsible for “defending the use of space for U.S. national security purposes. This includes protecting and preserving lines of communication that are open, safe and secure in the space domain. The service also will “deter adversaries and other actors from conducting activities that may threaten the peaceful use of space by the United States, its allies and partners; while compelling and imposing costs on adversaries to cease behaviors threatening that peaceful use.”

Chief of Space Operations Gen. John Raymond said the national space policy “guides the efforts of the United States Space Force as we continue to deliver capabilities and forces in defense of our nation’s interests in space.”