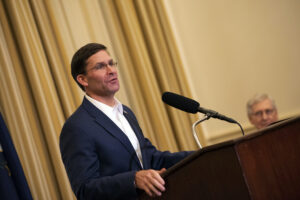 Trump’s tweet follows conflicting media reports over the past several days about the fate of Esper, who became secretary of the Army in 2017 and was sworn in as secretary of defense in July 2019. In recent months Esper had been at odds with Trump over the president’s call to deploy military forces to quell protests in the United States. Esper also clashed with the White House over the renaming of military bases named after Confederate leaders.

Congressional Democrats criticized the decision to terminate a high-level cabinet official so close to the end of the current administration. “Trump is creating a dangerously unstable national security environment during this transition period. Adversaries are watching,” Connecticut Sen. Chris Murphy tweeted.

Rep. Adam Smith (D-Wash.), chairman of the House Armed Services Committee, said in a statement that terminating Esper “destabilizes the Pentagon ahead of the presidential transition.”

Periods of presidential transition “leave our country exposed to unique threats,” said Smith. “Until President-Elect Biden is sworn into office next January, it is imperative that the Pentagon remain under stable, experienced leadership.”

Miller will be the fifth Pentagon chief to serve under Trump, although only Jim Mattis and Mark Esper were confirmed by the Senate. Patrick Shanahan and Richard Spencer served as acting secretaries.