The British government, seeking a replacement for the Galileo satellite navigation system, said it will consider alternatives to an original plan to develop its own satellite constellation.
SpaceNews 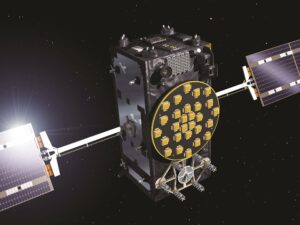 WASHINGTON — The British government, seeking a replacement for the Galileo satellite navigation system, said it will consider alternatives to an original plan to develop its own satellite constellation.

In a Sept. 24 statement, the British government’s Department for Business, Energy and Industrial Strategy said an ongoing study to examine the feasibility of a U.K. Global Navigation Satellite System (GNSS) will shift to one that will look at “new and alternative ways” of providing those services.

The U.K. GNSS effort started in 2018 when the British government failed to reach an agreement with the European Union about continued participation in the E.U.’s Galileo satellite navigation program once Britain leaves the E.U. Without an agreement, the British government would not have access to Galileo’s more secure navigation service, and would not be able to participate in development and operation of the system. However, it would have access to the free Galileo services, similar to those provided by the American GPS system and similar ones operated by China and Russia.

The announcement didn’t disclose details of alternative approaches the British government is pursuing. However, it suggested it would include OneWeb, the low Earth orbit broadband megaconstellation that the government, along with Indian company Bharti Global, is acquiring from bankruptcy. It also opened the door for cooperation with international partners.

“Through our Space-Based Positioning Navigation and Timing Programme, we will draw on the strengths of the UK’s already thriving space industry to understand our requirements for a robust and secure satellite navigation system,” Business Secretary Alok Sharma said in a statement. “This includes considering low orbiting satellites that could deliver considerable benefits to people and businesses right across the UK, while potentially reducing our dependency on foreign satellite systems.”

Any use of OneWeb for satellite navigation is unlikely to involve the current generation of satellites being built, if those satellites require modifications to provide navigation services. OneWeb announced Sept. 21 a revised contract with Arianespace to resume launches of its satellites using 16 Soyuz rockets over a two-year period starting in December. The company halted launches of the satellites when it filed for Chapter 11 bankruptcy in March.

OneWeb, in a tweet after the British government announcement, said it welcomed the new study and “stands ready to work with partners to develop [position, navigation and timing] solutions across a global footprint for the U.K. and partners.”