Brig. Gen. Stephen Purdy has been named commander of the U.S. Space Force’s 45th Space Wing and and director of the Eastern Range at Patrick Air Force Base, Florida.
SpaceNews 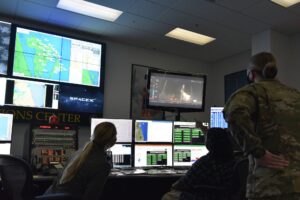 WASHINGTON — The Secretary of the Air Force announced Nov. 10 that Brig. Gen. Stephen Purdy has been named commander of the U.S. Space Force’s 45th Space Wing and director of the Eastern Range at Patrick Air Force Base, Florida.

Purdy is currently serving as Space Force director of plans, programs, and financial management at Peterson Air Force Base, Colorado.

The current commander of the 45th Space Wing Brig. Gen. Douglas Schiess will be assigned as director of space and cyber operations at the Space Force’s newly created Space Operations Command, headquartered at Peterson Air Force Base.

The leadership change is taking place as the 45th Space Wing is in the process of being reorganized as a space delta.

To create its own identity separate from the Air Force, the Space Force is naming its units deltas. The delta wing is the symbol the service adopted for its seal, logo and flag.

The changeover of wings to deltas started this summer when the Space Force deactivated three former U.S. Air Force space wings and replaced them with nine deltas and two garrison commands. Deltas focus on specific missions whereas garrisons provide support functions to deltas assigned to their installations.

The only two wings that have not yet been reorganized are the 45th Space Wing and the 30th Space Wing at Vandenberg Air Force Base, California.