The experimental spacecraft named Gunsmoke-J is one of seven satellites that will lift off from New Zealand in mid-March in Rocket Lab’s 19th Electron launch.
SpaceNews 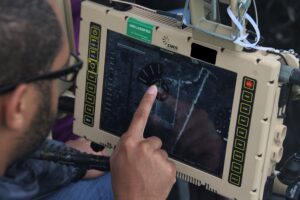 WASHINGTON — A Rocket Lab Electron launch vehicle scheduled to fly next month will carry a cubesat that will be used by the U.S. Army to assess the benefits of having dedicated imaging satellites for battlefield surveillance.

The experimental spacecraft named Gunsmoke-J is one of seven satellites that will lift off from New Zealand in mid-March in Rocket Lab’s 19th Electron launch. The payloads will be deployed to orbits between 450 kilometers and 550 kilometers above Earth.

The Army Space and Missile Defense Command has been working on Gunsmoke-J for several years. About the size of a loaf of bread, the satellite is part of a larger Army effort to demonstrate overhead data collection in direct support of combat operations.

Lira Frye, a spokeswoman for the Army Space and Missile Defense Command, said Gunsmoke-J is a demonstration of technologies “that could assist the ground force commander in long-range precision fires and other activities.”

Army leaders for years have argued that information from overhead satellites can be very useful to operational commanders but only if it’s timely. Data collected by satellites is not easily or quickly obtainable by troops in the field, as it can take hours or days to get images from national security satellites. That’s not going to help a battlefield commander, for example, locate a moving armored vehicle on the ground.

Gunsmoke-J is intended to help fill that gap. The satellite “will demonstrate an ability to deliver situational awareness down to the lowest tactical level possible,” said Frye.

The evaluation will be conducted by units assigned to U.S. Pacific Command.