As they prepare for the handover to the Commerce Department, military space watchers and traffic managers face a daunting workload due to increasing congestion in space.
SpaceNews 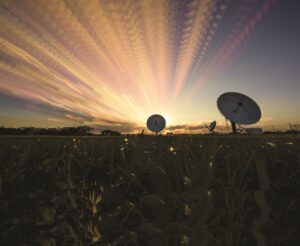 U.S. Space Command crews at Vandenberg Air Force Base, California, keep watch over more than 27,000 objects on orbit, estimate the probability of collisions and send warnings to satellite operators.

These space traffic management duties will be handed to the Commerce Department in the near future, depending on when Congress authorizes and funds the effort.

But as they prepare for the handover to Commerce, military space watchers and traffic managers face a daunting workload due to increasing congestion in space.

“We’re going to be overwhelmed with the number of satellites,” said Roger Thompson, a senior engineer at Aerospace Corp., a nonprofit corporation that provides technical advice to the U.S. government.

Space junk is a major concern but even more worrisome is the projected expansion of megaconstellations in low Earth orbit, Thompson told SpaceNews.

“In the entire history of the space program since 1957 we’ve launched about 9,000 satellites,” he said. The forecast for the next 10 to 15 years is that more than 50,000 satellites could be launched to orbit, most in low Earth orbit at less than 1,000 kilometers in altitude.

“Space is big, but it’s still limited and all of these satellites are going to be flying around in nearly circular orbits, in close proximity to each other,” said Thompson. This means more probability of collisions between objects, he added.

According to a recent Bank of America corporate research report, of the 27,000 objects larger than a baseball tracked by U.S. Space Command, about 8,000 are uncontrolled projectiles that pose a threat to space missions, and could cause devastating damage to orbiting satellites or the International Space Station.

The military’s eyes and ears in space are a collection of sensors called the Space Surveillance Network dispersed across multiple sites worldwide. The North American Aerospace Defense Command deployed these sensors as an early warning system to detect ballistic missiles.

The network has a mix of conventional radars, phased-array radars and telescopes known as the Ground-Based Electro-Optical Deep Space Surveillance system, or GEODSS.

LEO proliferation adds a significant burden to the crews responsible for analyzing space objects and estimating the probability of a collision, said Mac MacFarlane, a program manager at L3Harris. The company is working on several projects to upgrade telescopes and modernize data processing systems.

L3Harris in February received a $1.2 billion, 10-year contract from the U.S. Space Force to maintain and support Space Surveillance Network equipment. As part of that contract, the company was awarded $119 million in September to manage the construction of two new GEODSS sites in Spain and Australia. The two additional facilities will expand the coverage provided today from sites on the island of Diego Garcia in the Indian Ocean; at the White Sands Missile Range, New Mexico; and in Maui, Hawaii.

Kevin O’Connell, director of the Commerce Department’s Office of Space Commerce, said the goal is to set up a civilian space traffic management operation by 2024 “but our plans are really to have it done much earlier if possible,” he said in early October at the CyberSatGov virtual conference.

The sooner space traffic management transitions to the Commerce Department, O’Connell said, the sooner DoD will be able to focus on national security missions and allow Commerce to “develop a system that addresses the growing and changing needs of the space industry.”

“When space was a benign domain, just knowing where space objects were was good enough,” said Lt. Gen. William Liquori, deputy chief of space operations for the U.S. Space Force.

“But as our adversaries have pursued capabilities and made space a warfighting domain, we need to now know more than just where things are out there. We need to know what they’re doing and what types of capabilities they have,” Liquori said during an Oct. 1 webinar organized by the foreign affairs nonprofit WorldBoston.

Lt. Gen. Stephen Whiting, commander of the Space Operations Command, told the Advanced Maui Optical and Space Surveillance Technologies conference in September that the transfer of STM duties to Commerce will create a “positive and synergistic division of labor.”

The specifics have yet to be worked out, however, Whiting said. “We’re still laying the foundation of this initiative. We won’t hand off the baton and exit the track,” he added. “Significant challenges remain.”

When Whiting spoke at a Capitol Hill event in November 2019, he reminded the audience that the Air Force Space Command in October had introduced the term “space domain awareness” to be used in military documents and doctrine as a replacement for space situational awareness.

“This is to highlight the fact that while SSA has served us well over the decades and resulted in the best space traffic capability in the world, it continues to keep our thinking on the way things were done in the past,” said Whiting. With the space domain now being contested, he said, “SDA captures the ability to maintain track and custody of all threatening objects in space.”

O’Connell argues that the modern space economy demands more advanced data collection and analysis than what is currently available. “We’re trying to improve the timeliness, the accuracy and the precision of information that is going to commercial and international operators,” he said.

Lt. Col. Justin Sorice, commander of the 18th Space Control Squadron that performs the space surveillance duties for U.S. Space Command, said his crews are doing the best they can with legacy systems to improve the quality of space data. “And we are working across the enterprise to look at how we integrate commercial data in the future,” he told SpaceNews. U.S. Space Command also has access to data from dozens of international partners that have signed SSA agreements with the United States.

Improvements in the works

Some new products being developed are aimed at tracking proliferated LEO constellations, Krolikowski said during the AMOS conference. Processing all that data requires more automation, she said. “Everything is manual right now.”

The Space C2 program plans to deliver by 2022 a new artificial-intelligence powered system for the 18th SPCS that will process data in real time and feed information to operators faster.

O’Connell said his office wants to create an “open architecture repository of space data” built on the foundation of what is available today from the publicly available space catalog.

“But we’re not stopping there,” he said. The private sector is now investing in sensors and analytics for more advanced space situational awareness, O’Connell noted. “We will be pulling in commercial data, owner operator ephemeris data and other U.S. government data” such as space weather information from the National Oceanic and Atmospheric Administration.

“Our goal is to aggregate as much high-quality data to provide basic space safety and collision avoidance services to commercial and international operators across the globe,” said O’Connell. “We’re still working on concepts related to basic services which will be provided free of user fees.”

A longer-term goal for Commerce is to develop a commercial “sandbox” marketplace for providers to offer specialized space situational awareness products and services, O’Connell said.

AGI operates the Commercial Space Operations Center outside of Philadelphia, which collects orbital data to provide satellite operators with warnings of potential conjunctions.

For the U.S. military, “the ability to monitor and predict potentially threatening actions in space is ever more critical as provocative satellite operations continue to become the norm,” Langster said.

He said both Defense Department and private-sector satellite operators will benefit from the fusion of government and commercial data.

The Aerospace Corp.’s Thompson said the space surveillance challenges will become more daunting. What that means for the future is that cooperation among government agencies, companies and allied nations will be more important than ever, he said.

That also is the pitch made by O’Connell as he tries to get Commerce’s space traffic management efforts off the ground. “The transition, I think, is going as well as it can within resources,” he said. “I’ll tell you that the relationship with Defense is extraordinary.”