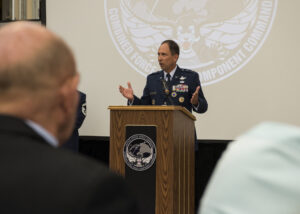 WASHINGTON — It’s now been confirmed that the Biden administration is fully behind the U.S. Space Force. And Defense Secretary Lloyd Austin noted in congressional testimony that he views space as a national security concern.

The new administration will release its own national security space policy guidance but it’s not expected to depart significantly from the previous administration’s, the deputy commander of U.S. Space Command Lt. Gen. John Shaw said Feb. 3.

During a Space Foundation online event, Shaw noted that DoD’s most recent space strategy was issued by the previous administration but he anticipates that new policy guidance from the current administration will continue on a similar course.

“I think we’ll be ready to see what the next administration’s guidance might be,” said Shaw. “I expect it will be along similar lines.”

Referencing the secretary’s statement, Shaw said, “We are keeping our eyes focused on that. That will not change.”

A summary of the“Defense Space Strategy” released in June 2020 talks about space as a domain of war and also as an environment where there is growing economic, commercial and technological activity. The full document is classified.

U.S. Space Command is one of 11 unified military combatant commands. It was first established in 1985 and deactivated in 2002 when space operations were moved under U.S. Strategic Command. The Trump administration reactivated in August 2019.

The U.S. Space Force, a branch of the U.S. armed services, is responsible to recruit, train and equip forces that are assigned to Space Command.

Shaw was a career Air Force officer and transferred to the U.S. Space Force in November 2020.

Space Command is responsible for the protection of critical satellites that are used in every aspect of military operations. It also provides satellite-based services — communications, navigation, surveillance and weather — to U.S. military and allied forces that operate on land, at sea, in the air and in cyberspace.

“Where we see space at its most powerful today is in how it enables terrestrial warfighting,” Shaw said.  The command’s primary focus is “making sure that we are giving space capabilities of all kinds — intelligence, surveillance, reconnaissance, positioning, navigation and timing, military satellite communications and commercial satellite communications,” he said. “And we make sure that we are protecting them, defending those capabilities against threats.”

Space Command’s top challenge, Shaw said, is understanding what is going on in space. Space domain awareness is needed across all orbits, he said. “We expect potential threats could be operating in low-Earth orbit, in geosynchronous orbit and beyond.”