Rep. Jim Cooper (D-Tenn.) wants the Biden administration to put pressure on the Space Force to clean up its procurement act.
SpaceNews 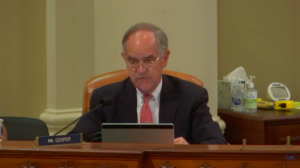 WASHINGTON — Rep. Jim Cooper (D-Tenn.), a leading proponent of establishing the U.S. Space Force, said he wants the Biden administration to put pressure on the service to clean up its procurement act.

A dysfunctional procurement process for military satellites was the “primary motivation” that convinced many members of Congress that space should be managed by a separate service branch under the Department of the Air Force, Cooper said Jan. 27 on a Politico live webcast.

He said lawmakers are concerned that Space Force programs are not keeping up with rapid advances in commercial space technology and the service is not modernizing fast enough. More than a year since the Space Force was established, Congress has yet to hear from the Space Force on a new approach for buying future systems, Cooper said.

The arrival of a new administration is an opportunity  for a “fresh start and new look,” he said.

Cooper criticized former secretary of the Air Force Barbara Barrett for failing to submit a congressionally mandated report on space acquisition reforms. “I plan on holding hearings on this to see if we can get them to comply with the law,” he said. The new administration has to “clean this up.”

The Biden administration has not yet nominated a replacement for Barrett. According to multiple sources, Barrett’s proposal last year was quashed by Trump administration budget officials, which prevented her from delivering it to Congress.

Shawn Barnes, who is performing the duties of the assistant secretary for space acquisition and integration, told reporters on Wednesday he has not yet discussed these issues with Biden transition officials. Barnes said the 2021 National Defense Authorization Act requires the secretary of the Air Force to submit a new report on space acquisitions in May.

“I do not see a significant hurdle to be able to accomplish that report in the timeframe required,” said Barnes.

In testimony submitted to the Senate Armed Services Committee for his Jan. 19 confirmation hearing, Defense Secretary Lloyd Austin said DoD should work with civil space agencies to “leverage innovation and investments driven by the private sector.”

Austin said a “streamlined and responsive acquisition process” is needed to take advantage of emerging technology.

He expressed support for DoD’s new space acquisition organizations — the Space Development Agency and the Space Rapid Capabilities Office. These agencies should be given an opportunity to succeed even as DoD looks at possible reorganizations, Austin said. “I will encourage SDA and Space Command to pursue leveraging commercial technology via commercial services … and integrating them into government-owned and operated systems.”

Space Force should ‘get back to basics’

Cooper said the Space Force remains a “work in progress” and looks forward to seeing the service move forward and not be used as a political prop as former President Trump did.

The idea of a space service was bipartisan “way before former President Trump tried to hijack it for political purposes because it was the shiny object,” said Cooper.

The Biden administration, said Cooper, “needs to make sure people know this is serious and bipartisan.” The Space Force, he added, has to “get back to basics” and focus on its responsibilities to operate and defend the nation’s satellites.