Gen. David Thompson said it would make sense for the government to pay companies to clean up space junk if such services existed.
SpaceNews 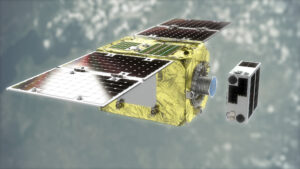 WASHINGTON — Vice Chief of Space Operations of the U.S. Space Force Gen. David Thompson said it would make sense for the government to pay companies to clean up space junk if such services existed.

Orbital debris represents a risk to spacecraft and to safe operations in space, Thompson said March 16 in an interview with national security analyst John Nagl, of the Foreign Policy Research Institute.

“I’ll pay by the ton if they can remove debris,” Thompson said, noting that there are no companies that can do that today.

Nagl said someone in the audience asked if Thompson has heard of Astroscale, a Japan-based company with operations in Denver, Colorado, that plans to launch a debris-removal mission later this week.

Thompson said he was not aware of the company. “I’m going to have to go Google that,” he said.

Regardless of which companies in the space industry end up successfully providing space junk cleaning services, the Space Force would be a customer, Thompson said.

“The more we can depend on commercial space for routine activities like transportation and debris removal, the more we can focus on national security,” he said.

Space debris includes human-made objects like nonfunctional spacecraft and abandoned launch vehicle stages, and fragments from the breakup of rocket bodies and spacecraft.

The European Space Agency estimates there are 3,600 working satellites in orbit and 28,200 debris objects. More than 10,000 satellites are scheduled to launch to low Earth orbit over the next decade.

Astroscale on Saturday will fly the first commercial mission to demonstrate space debris docking and removal technologies. The company will launch a satellite called End-of-Life Services by Astroscale demonstration (ELSA-d) on a Russian Soyuz rocket from the Baikonur Cosmodrome in Kazakhstan.