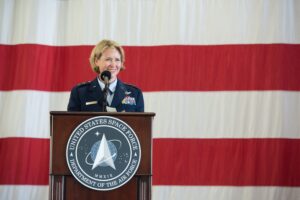 Burt is the commander of U.S. Space Command’s combined force space component at Vandenberg Air Force Base, California. She said international momentum is building for the adoption of a binding set of rules to make space safer and sustainable.

U.S. Space Command is taking a central role in this effort amid growing alarm about Russia’s anti-satellite weapon tests and concerns that the proliferation of satellites and debris is rapidly cluttering Earth orbit.

Burt said a team of Defense and State Department officials is drafting language on the U.S. position on a resolution approved in December by the United Nations General Assembly which calls for “norms, rules and principles of responsible behaviors” in space. The UN has asked countries to submit input by May 3 for inclusion in a report to be reviewed by the UN General Assembly this summer.

The problem with previous UN resolutions is that they were non binding, said Burt. “We’re going to prepare what we believe will be proposal language that will go to the UN and hopefully result in a binding resolution,” she said. “There’s a lot of good work happening on the international stage.”

For decades there have been calls for the UN and other organizations to figure out a way forward as more nations engage in space operations. The 1967 Outer Space Treaty remains the basis for international space law but experts say the treaty has become outdated. For example, it bans the use of weapons of mass destruction in space but countries now deploy dual-use spacecraft that can be used for peaceful and military purposes.

China and Russia over the past decade have floated treaty proposals to ban weapons in space but the United States has rejected them as unacceptable.

The December UN resolution — originally proposed by the United Kingdom — focuses on curtailing irresponsible or potentially threatening activities and on reducing the risks of misunderstandings and miscalculations. “The U.K. has stepped up,” Burt said. The United States is working with the U.K. and with a broader coalition that includes Canada, France, Germany Australia, Canada and New Zealand.

It’s not just the U.S. and allied governments that care about this, said Burt. Private satellite owners and operators from many nations “have a vested interest in keeping the domain safe, sustainable and free for all to use.”

U.S. Space Command has grown especially mistrustful of Russia following recent tests of weapons that could be used to target satellites in low Earth orbit. In 2020 Russia tested two direct-ascent weapons. It also tested a co-orbital system that the United States claims was aimed at a U.S. intelligence satellite.

To deter these types of activities, said Burt, “we want to see something that is binding. And it’s going to be something we can all agree to.” It’s not enough, she said, to call someone “bad or irresponsible if I haven’t fully defined what those things are on the international stage.”

A useful template for rules in space is the maritime domain, she said. “There’s been a lot of exploration over hundreds of years and we’ve established norms that become laws about the rules of the sea. How we operate in the space domain needs very similar kinds of customs and processes.”

Any agreement has to clearly define what constitutes threatening, hostile or irresponsible behavior, Burt said. Based on that, a nation could decide if a particular action in space constitutes an act of war or if it can be handled through diplomatic or economic sanctions.

The United States is not calling for a ban on specific weapons, Burt said. “The Chinese and the Russians have already put weapons in space. So I think we’re way past having a conversation about regulating them per se, which is why we focus on norms of behavior.” With regard to anti-satellite weapons, “I don’t think you can you can put that genie back in the bottle.”

What is needed is transparency so countries that send dual-use spacecraft to orbit disclose the purpose of that deployment. If a nation launches a servicing vehicle with a robotic arm “and it is meant to be an offensive capability as a deterrent, then so be it,” as long as it’s operated in a safe and responsible way, she said. “Just because I launched an offensive capability doesn’t mean I’m going to use it unless there’s a reason I need to defend my assets.”

With more nations now involved in space, there are concerns beyond the use of weapons, such as safety of flight and separation of trajectories so satellites do not collide or interfere with each other, said Burt, who spent 28 years in the U.S. Air Force operating satellites. Safety concerns will only grow as more humans start going to space, she added.

Any international agreement also should hold accountable actors who create long-term debris. “That is something that we see is one of the biggest concerns,” she said. “We need to define what is long term debris but a clear example is China’s 2007 anti-satellite test. We are still tracking debris from 2007.”

Awareness of what other countries are doing will help attribute actions, said Burt. In instances when someone threatens a U.S. satellite, ideally “we want to show a picture … and share that on the national news” the same way the Air Force shows videos of aerial bombing campaigns.

Most U.S. intelligence about the space domain is classified, however. Burt said U.S. Space Command leaders are working with the intelligence community to “declassify things we need to talk about to the American people.”