The United Arab Emirates plans to send a small rover to the moon in 2024, the latest step in the country’s growing space ambitions.
SpaceNews 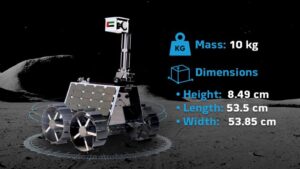 WASHINGTON — The United Arab Emirates plans to send a small rover to the moon in 2024, the latest step in the country’s growing space ambitions.

Sheikh Mohammed bin Rashid, vice president and ruler of Dubai, formally announced the Emirates Lunar Mission Sept. 29. That mission will place a small rover on the moon carrying several instruments that officials with the country’s space agency say will complement lunar missions by other nations.

“Primarily, we would like to advance our capabilities and technologies,” said Hamad Al Marzooqi, project manager for the Emirates Lunar Mission at the Mohammed Bin Rashid Space Centre, in an Oct. 5 interview. “Since we’re going to the moon, it would be a shame if we don’t do interesting science there.”

The rover, weighing only about 10 kilograms, will carry three main science instruments. One will be a microscopic imager to resolve particles in lunar regolith at sizes as small as 50 microns. A thermal imager will study the thermal characteristics of the regolith, providing “ground truth” for similar observations made by orbiters. A Langmuir probe will measure the electron density at the lunar surface.

Besides those three scientific instruments, the rover will carry an additional payload, called material adhesive demonstration. It will examine how the lunar regolith clings to different types of materials. The rover will also have high-definition cameras for science and navigation.

That payload, Al Marzooqi acknowledged, will be difficult to fit into a relatively small rover. “Engineers are struggling for each gram,” he said. “It’s very challenging to fit all those instruments and do all this exciting science into this limited volume.”

The project has identified five potential landing sites, all in mid-latitude regions of the moon not yet visited by other missions. Those potential landing sites are selected based on the science objectives as well as terrain that is safe for the rover to traverse. The solar-powered rover is designed to operate for a two-week lunar day, but Al Marzooqi said they will put the spacecraft into hibernation during the night “and then try to wake up again for a second day.”

While the UAE plans to develop the rover, it won’t develop the lander that carries it to the lunar surface. Instead, said Adnan AlRais, program manager for Mars 2117, the overall space exploration initiative that includes the Emirates Lunar Mission, the UAE will look to international partners or commercial providers to carry the lander to the moon.

“We’re exploring all options” to deliver the rover to the moon, he said, including partnerships with other national space agencies or purchasing space on a commercial lunar lander mission. “In the coming months we’ll be in a position to select a partner that will be providing the landing.”

There will also be opportunities for international space agencies and organizations to collaborate on the science payload, they said. That will follow the model of the Emirates Mars Mission, an orbiter also known as Hope, that carried instruments developed in cooperation with several American universities.

AlRais said that the lunar rover will leverage the experience the UAE developed with the Hope mission and earlier Earth observation spacecraft in terms of engineering, project management and spacecraft operations. “We are building on that experience that we’ve developed for the last 14 years.”

He declined to provide a budget for the mission, but said it would cost less than the Hope mission. That spacecraft, currently on its way to Mars after a launch in July, has an estimated total cost of $200 million.

AlRais said this rover could be the first in a series of lunar missions by the UAE, with subsequent ones going to the polar regions that are of particular interest because of the ice deposits that may exist there. “We definitely need to have continuous missions to the moon to contribute to the global efforts for lunar exploration,” he said. “At this stage, we want to focus on mission one, and later on, at a certain stage, we will announce follow-on missions.”