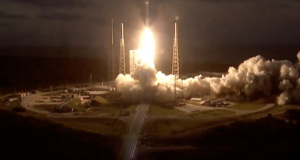 The rocket lifted off at 5:32 p.m. Eastern from Space Launch Complex-41 at Cape Canaveral Air Force Station in Florida.

The satellite’s final orbit is classified. At the request of the NRO, ULA ended the webcast about three-and-a-half minutes after liftoff following payload fairing separation.

The mission dubbed NROL-101 was originally scheduled for Nov. 3 but was delayed to repair a duct at the top of the rocket that provides conditioned air to the payload fairing. It was again scrubbed Nov. 4 due to an anomaly in the ground system liquid oxygen valves.

The Atlas 5 flew with a five-meter payload fairing, three GEM 63 solid rocket boosters side-mounted to the first stage and a single RL10C-1 engine on the Centaur upper stage.

This launch was the first to use GEM 63 rocket motors made by Northrop Grumman.  ULA plans to fly the GEM 63s on future Atlas 5 missions while Northrop Grumman completes the development of a larger GEM 63XL version for ULA’s future vehicle, the Vulcan Centaur.

The NRO’s payload is classified. Ted Molczan, a Toronto-based amateur satellite observer, said that based on his estimates on the target orbit inclination, he believes NROL-101 is an SDS relay satellite. The Satellite Data System (SDS) is a constellation of U.S. military communications satellites.