ULA statement: “Initial indications were with a ground system, and we are working to confirm the exact cause.”
SpaceNews 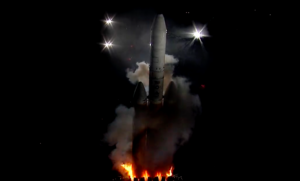 WASHINGTON — United Launch Alliance has not yet confirmed exactly what caused a dramatic abort of a Delta 4 Heavy launch just three seconds before liftoff on Aug. 29.

“We are in the middle of conducting a thorough investigation to determine the root cause of the NROL-44 on-pad abort,” ULA spokeswoman Julie Arnold said in a statement to SpaceNews.

During the ignition sequence before the planned 3:28 a.m. liftoff, fire was seen at the bottom of the rocket’s three engines but ULA said the engines never ignited and the automated control system aborted the mission.

“Initial indications were with a ground system, and we are working to confirm the exact cause,” said Arnold. “The system aborted at T-minus 3 seconds because the start conditions were not met to proceed with core engine startup.”

The company will need more time to complete the investigation, said Arnold, before it sets a new target launch date for NROL-44.

“We will take our time to thoroughly review the Delta 4 Heavy to identify, repair and retest the system. Once that is complete we will identify a new launch date,” Arnold said.