The hot fire abort of NROL-44 happened three seconds before the Delta 4 Heavy was to lift off.
SpaceNews 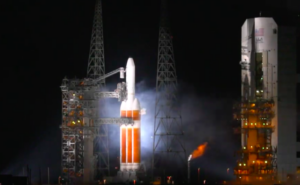 The launch of NROL-44 was aborted three seconds before the rocket was to lift off from Space Launch Complex-37 at Cape Canaveral Air Force Station in Florida.

The automatic abort was triggered by a hot fire after the Delta 4 Heavy’s three engines appeared to ignite but then shut off. ULA CEO Tory Bruno said on Twitter that the cause “appears to have been in the ground system.” He said the abort system “functioned as intended to protect the vehicle and payload.”

ULA said in a statement it is “reviewing all data and will determine the path forward.” Another launch attempt won’t happen for at least seven days.

This was the third launch attempt in as many days after two scrubs — one on Aug. 26 due to customer request and one on Aug. 27 resulting from a technical problem with the ground pneumatics control system.

The Aug. 29 launch originally had been scheduled at 2:04 a.m. but was delayed by a thermal anomaly due to a lower than expected temperature in one of the rocket’s compartments.