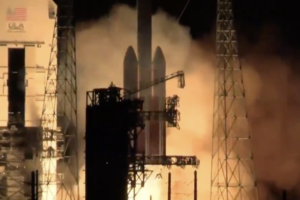 The vehicle lifted off at 8:09 p.m. Eastern from Space Launch Complex-37 at Cape Canaveral Space Force Station in Florida.

The webcast of the flight ended approximately seven minutes into the flight.

The mission named NROL-44 finally got off the pad following three months of delays and scrubs. including a pair of last-minute aborts and other delays caused by problems with the launch pad equipment.

NROL-44, a geostationary signals intelligence satellite, was the 12th mission for the Delta 4 Heavy. It was ULA’s 142nd mission and the company’s 30th for the NRO.

Preparations for this launch started more than a year ago. The Delta 4 Heavy was rolled out to the pad in November 2019. The NROL-44 payload was delivered in July.

The Delta 4 Heavy is slated to be retired after launching four more NRO missions over the next few years. Two will be from Cape Canaveral and the other two from Vandenberg Air Force Base, California.