United Launch Alliance is looking at a three-core version of its Vulcan Centaur rocket, although an executive said that such a vehicle is “pretty far out on the horizon.”
SpaceNews 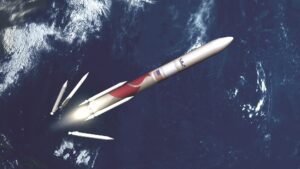 WASHINGTON — United Launch Alliance is looking at a three-core version of its Vulcan Centaur rocket, although an executive said that such a vehicle is “pretty far out on the horizon.”

In a Sept. 9 keynote at the Secure World Foundation’s Summit for Space Sustainability online conference, Mark Peller, vice president of major development at ULA, said that a “Vulcan Heavy” rocket, with three booster cores, is something the company is considering for future markets that require greater performance than what the Vulcan vehicle currently under development can provide.

“We are continually studying the evolution of our product line,” he said. “We’re not going to rest on our laurels and we’re going to continue to evaluate what the market needs.”

Speculation about a three-core version of Vulcan ramped up in recent months when images appeared on social media of what appeared to be a model of that version of the rocket. Tory Bruno, president and chief executive of ULA, later tweeted an image of that model. “Just a model,” he wrote. “Related to a routine, ongoing trade study. Nothing more.”

By demand of the Internet, here is the uncropped picture of the #MarsPerseverance flip flops. Just a model. Related to a routine, ongoing trade study. Nothing more. pic.twitter.com/d2iBPqX0rL

Neither Bruno nor Peller quantified how much additional performance a three-core Vulcan would provide over the Vulcan Centaur. Peller would only say that the three-core vehicle offered a “significant jump in performance and could support a lot of emerging, but not mature, needs in both LEO and cislunar.”

ULA’s Delta 4 Heavy, a three-core booster, provides approximately twice the payload performance of the most capable version of the “single-stick” Delta 4, the M+(5,4). ULA retired the single-core versions of the Delta 4 in 2019.

Vulcan Centaur is designed to ultimately replace both the Atlas 5 and Delta 4 Heavy. The most powerful version of the Vulcan, with six solid-fuel strap-on boosters, can place 27,200 kilograms into a LEO reference orbit, nearly the same as the Delta 4 Heavy. That suggests a three-core Vulcan Centaur might rival or even exceed Falcon Heavy in LEO payload performance.

Peller didn’t discuss the markets that might require a three-core Vulcan, but noted that the single-core Vulcan Centaur is designed to meet the needs of existing national security missions. “That single-core provides what we would traditionally classify as heavy-lift performance, what we would do with a Delta 4 Heavy currently,” he said.

The military appears to be taking a wait-and-see approach to any “super heavy” vehicles, which would include SpaceX’s Starship under development. “We believe the current providers address the plans we have today for the near future,” said Brig. Gen. D. Jason Cothern, who oversees launch services procurement for the U.S. Space Force, during a RAND Corporation webinar Sept. 8.

Peller said any development of a heavy version of Vulcan is not in the company’s near-term plans. “We have our plate pretty full, but ultimately it’s going to be the customers and the market that drives where we head with product development,” he said. “A three-core Vulcan Heavy is just one of the many things that we’re looking at right now. That’s pretty far out on the horizon.”

He said ULA’s focus is on completing the Vulcan Centaur and performing its first launch. That mission, carrying a lunar lander for Astrobotic, is scheduled for the second half of 2021. It will be followed a few months later by a launch of Sierra Nevada Corporation’s Dream Chaser cargo vehicle to the International Space Station.

As the name suggests, the Vulcan Centaur uses a version of the Centaur upper stage called the Centaur 5, which is larger and more powerful than the one currently used by the Atlas 5. ULA originally proposed developing a new upper stage, called Advanced Cryogenic Evolved Stage (ACES), for Vulcan. ACES offered increased performance over earlier versions of the Centaur and a technology called integrated vehicle fluids that eliminated the need for consumables beyond the stage’s liquid oxygen and liquid hydrogen propellants. That opened up possibilities of using ACES for applications after satellite deployment, such as a tug in cislunar space.

Peller described ACES as a concept that ULA is no longer actively pursuing. “We did a lot of studies, we invested in a lot of technology development to assess the feasibility of some of the innovative features of ACES,” he said. “That has served us well, because a lot of that original ACES work has its fingerprints in our new version of Centaur, the Centaur 5 we’re fielding with Vulcan.”

“Those studies five, eight years ago certainly served us well, and it put us on a good path forward here for the evolution of our upper stages,” he added. “We will continue to evolve our upper stage to meet the needs of the market going forward.”