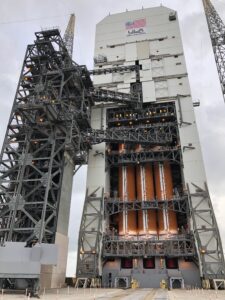 NROL-44 will be the 41st launch of United Launch Alliance’s Delta 4 rocket, and the 12th in the heavy configuration. ULA said Aug. 24 that the vehicle passed a launch readiness review and is on track for a 2:16 a.m. liftoff on Wednesday.

NROL-44 is the first of the final five missions to be flown by the Delta 4 Heavy between now and 2024 when ULA intends to retire the three-core rocket.

NROL-82 is planned to launch from Vandenberg Air Force Base, California, later this year.

NRO heavy missions are schoolbus-size satellites and are considered the most complex and expensive missions flown by the U.S. government.

The final five launches were sole-sourced to ULA, the Air Force said, because the Delta 4 Heavy was the only rocket that could meet the NRO’s payload compatibility requirements, and ULA the only provider that could satisfy the agency’s demands for satellite handling.

The NRO heavy missions (known as Category C) beyond 2024 will be competed between ULA and SpaceX which were selected as the two providers for the National Security Space Launch Phase 2 procurement. ULA is developing the Vulcan Centaur to replace the Atlas 5 and the Delta 4. SpaceX will fly the Falcon 9 and the Falcon Heavy.

The Air Force said that by the time the Delta 4 Heavy is taken out of service, both ULA and SpaceX are expected to be ready to compete for the Category C contracts.

The Phase 2 launch services procurement was intended to introduce competition into the launch market and bring costs down. At more than $400 million each, the Delta 4 Heavy missions are the most expensive.

The Air Force has not explained why the SpaceX launch awarded Aug. 7 costs far more than the ULA launches. The contracts cover additional costs beyond the actual launch service price. The prices that ULA and SpaceX bid for the Phase 2 missions are proprietary.

SpaceX CEO Elon Musk in 2018 tweeted: “A fully expendable Falcon Heavy, which far exceeds the performance of a Delta IV Heavy, is $150M, compared to over $400M for Delta IV Heavy.”

“We don’t yet know enough about the award to know what factored into SpaceX’s pricing for that mission,” said defense budget analyst Todd Harrison, of the Center for Strategic and International Studies.

“It could be that some of the one-time development costs associated with meeting some of DoD’s unique launch requirements — like vertical payload integration — are included in the cost of that first launch,” Harrison told SpaceNews.